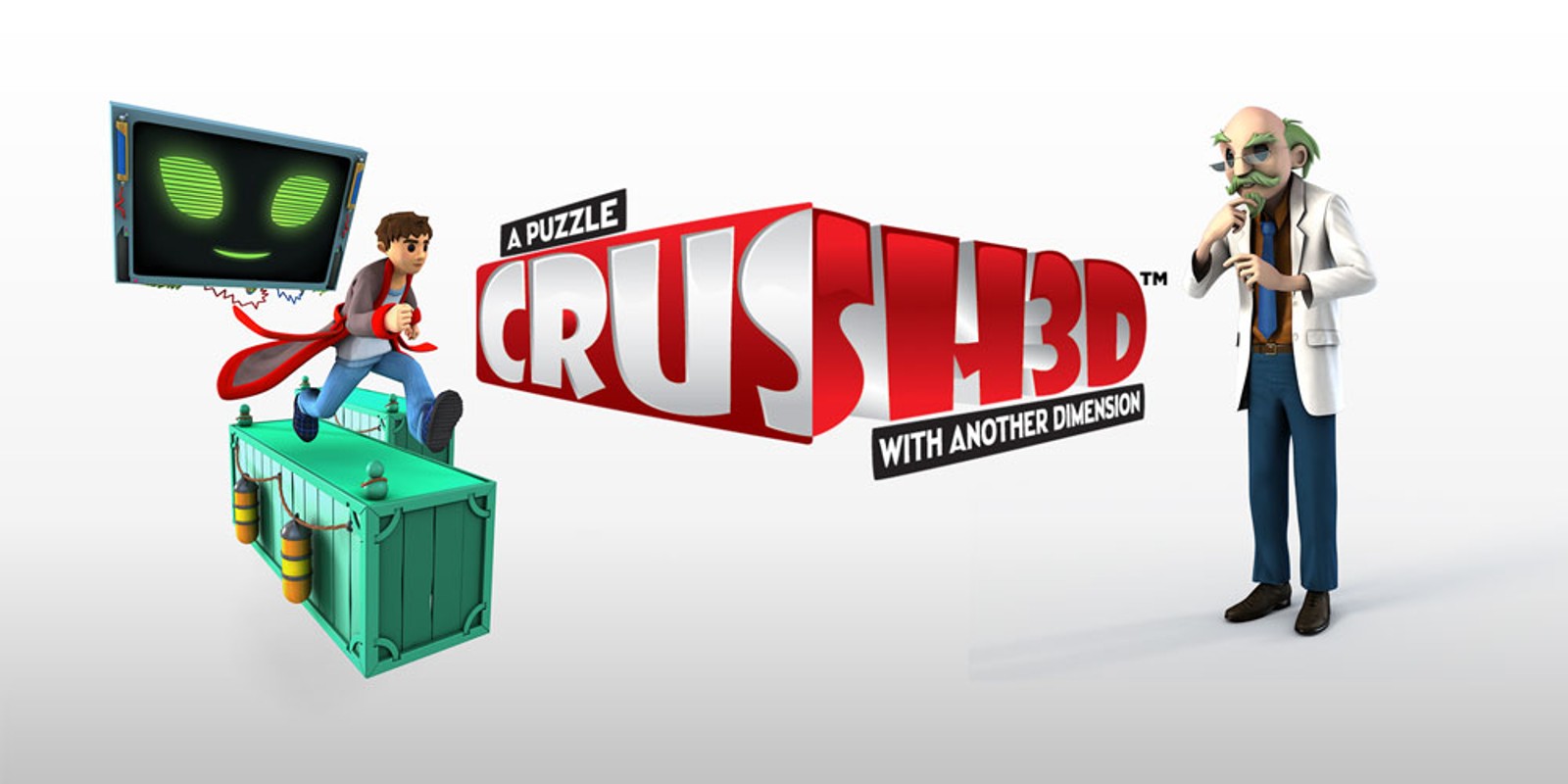 After Zoë Mode’s Disney Sing It, Rock Revolution and Dancing With the Stars, it’s unsurprisingly refreshing to see a new concept which steps out of the already overdone party game genre and brings a thorough, enjoyable and completely new experience to the Nintendo 3DS.

When you first begin CRUSH3D, you’re introduced to the game’s protagonist, Danny, who is asked by Dr. ‘Doc’ Doccerson to test out his latest invention, C.R.U.S.H. – a new computer that allows its users to enter their own minds and overcome mental blocks; Danny’s own mind being the basis for each of CRUSH3D‘s 40 levels. Starting in the City you use the Circle Pad to walk and the D-pad to control the camera, switching the viewing angle 90° at a time. Getting used to this is easy enough, but it doesn’t stop here. Push the left shoulder button and you’ll perform a ‘crush’, which flattens the previously-3D game world into a 2D platformer of sorts, while a second push of the L button ‘uncrushes’.

While the puzzles seen in the City are relatively simple, requiring a side-crush here and top-down crush there, it soon picks up momentum, requiring more complex combinations of crushes; the developers occasionally going a bit wild and implementing moving platforms and the odd enemy, although these levels come few and far between.

As far as CRUSH3D‘s difficulty goes, you’ll be able to breeze through at least three quarters of the stages, before facing a real challenge in the final area, but it doesn’t end here. On top of the Marbles hidden throughout the stages (collect half to open the exit), there’s also a trophy and a book hidden in hard-to-reach nooks and crannies in every stage; the former opening a level in the harder Trophy mode while the latter unlocks a piece of the game’s concept artwork in the gallery, meaning replay value is key. Want to perfect every level? Don’t forget to collect each and every one of the Marbles, too.

There’s even an element of customisation. As a sort of achievement system in its own right, you’ll unlock new dressing gowns for Danny to wear by completing a range of tasks, and although they’re purely for aesthetic purposes, they’re still a nice addition and offer even more replay value to those who want to stick with the game until they’ve reached 100%; and believe us, there’s plenty to do after the credits have rolled. After finishing the 40 story levels with minimum requirements, collecting a few trophies and artwork pieces, we were only at 33% completion.

Another nice little addition (CRUSH3D seems to be full of them!) is the ability to place gifts in levels, the idea being that you hide them in the hardest part of a level you can find, take your 3DS out with you and hope to StreetPass somebody who also owns the game. The gift will then appear for your StreetPass partner on that extra hard platform that you managed to reach, while any gifts they placed in their game will also appear on your 3DS. What’s in the gifts, you ask? By collecting these gifts you earn Gift Points, the number depending on how quickly you manage to find the hidden gift after receiving it. Still not convinced that you should activate StreetPass for this title? How’s this: with said Gift Points you can purchase dressing gowns for Danny’s wardrobe that can’t be unlocked by otherwise playing the game. That said, if you’re the type who lives in a remote village with nobody to StreetPass, you can invest in Gift Points with the Play Coins you may have accumulated whilst trekking to the shops.

Sadly, CRUSH3D is not a game without its faults. In one of the latter stages of the game, we were attempting to reach the end goal by performing a sidewards crush and jumping from an obstacle at the last second. After numerous failed attempts, the game froze meaning we had to restart our 3DS… and the level. Although this can be easily overlooked by taking a conventional route to the exit (we were doing it wrong after all), it’s almost like we’re being unintentionally punished for exploring.

Overall, CRUSH3D is a great little puzzler that we wholeheartedly recommend to those who enjoyed the recent eShop hit, Pullblox, or simply enjoy puzzle games in general. Thanks to its replay value, unlockables and bonus Trophy levels, there’s plenty to see and do outside of the 10-hour story mode: definitely one to look out for.