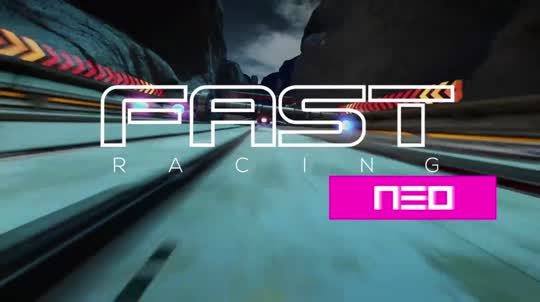 Shin’en Multimedia has dabbled with the racing genre in the past, but WiiWare’s Fast Racing League slipped under the radar of many – perhaps due to a diminishing audience or a lack of exposure on the platform. Despite being an independent studio, Shin’en has consistently proven its technical prowess with impressive visuals on both Wii and Nintendo 3DS, although its flagship Art of Balance and Jett Rocket series were criticized by many for their lackluster gameplay. Wii U launch title Nano Assault Neo showed a glimmer of what the development team could do with more powerful hardware, but Fast Racing Neo is finally the game that fans have been clamoring for.

If I had to describe Fast Racing Neo in one word, it would be “fast” – and I don’t use the term lightly. Be sure to fasten your seatbelt before climbing into your machine of choice. Sitting on the starting grid as robotic Lakitu-look-alikes hold up a set of traffic lights gave me a split second to gaze in awe at the beautiful scenery of a particularly industrial-looking track. As the final red light extinguished and I mashed the “A” button, everything was gone; what was once a dusty backdrop became nothing but a blur. For the first few races, you’ll feel overwhelmed and exasperated as you clutch the GamePad (or the Pro Controller, preferably); hold on for dear life as you hurtle around the track at speeds of up to 750 miles per hour.

A couple of races in, as you get a grasp for the controls and begin to realize that there is method to Fast Racing Neo’s madness, you’ll wonder how you ended up racing around a frozen alpine circuit, or within the molten crater of a live volcano. Such is the variety that Shin’en has managed to squeeze in, and there won’t be a single track in the available sixteen that bores you. Variety may be the spice of life, but there’s unfortunately two or three tracks which don’t live up to the otherwise high standards. Most tracks prove to be brutal in a rewarding sense – you’ll understand where you went wrong as you fly off a narrow bridge and know how to better approach the corner on the next lap – but a select few throw in obstacles that become unavoidable unless you’re extremely lucky or can remember their particularly unfair locations.

Slamming into an obstacle or flying off the track leaves you immobilized for a number of seconds, but it’s not so much of a setback that you’ll lose a great deal of progress. And the game generously refills half of your boost meter upon respawn to get you back up to speed with a fair shot at achieving victory. That said, I managed to drop a seemingly guaranteed first place finish in the final few seconds of a race more than once during my time with the game. This proves especially annoying when that particular loss also forfeits a top-three finish in the current Championship. Failing to reach third place prevents further progress through the game until you return and play through that cup’s four races.

There’s never a dull moment in Fast Racing Neo, especially when you take its unique color mechanic into consideration. Each track has speed boosts or ramps, which are colored either blue or orange. You must switch your machine’s color state with a tap of the L or X button to match the color of each obstacle. Doing this correctly will reward you with a speed boost, or enough height to clear a large gap as you hit a ramp; blasting over an orange boost strip while your machine is in the blue state, meanwhile, will penalise you by halving your speed. It adds an extra layer of complexity and further keeps you on your toes – especially during the faster difficulty settings.

I’ve got to say, I commend Shin’en for sticking to its guns and releasing a genuinely difficult game. Fast is certainly challenging throughout, and I’m sure many players will revel in the challenge presented – even in the Novice Championship. There’s enough tracks to keep you entertained, yet not so many that it feels like a slog to play through each one at least three times on each difficulty setting. Once you’ve eventually mastered each one, Hero Mode will open up on the main menu and present you with an even bigger challenge.

Fast Racing Neo isn’t a racing gaming for everyone; you probably won’t be playing it with your grandparents over Christmas, so leave that to Mario Kart 8. If you’re a fan of its particular breed of gameplay, you’ll be pleased to hear that Time Trials and Online modes will increase its longevity to no end. Online races support up to ten players, and although I wasn’t able to test the servers pre-release, I could see from the lobby that its ranking system is similar to Mario Tennis: Ultra Smash. But hey, at least it lets you play with friends! If it runs at a solid 60 frames per second online, it’ll prove to be a fun diversion at the very least. During local play with friends in the same room, the visuals begin to look a little janky, but the frame rate holds its own with no noticeable drops.

I think the demand for a new F-Zero game is at the highest it’s ever been; Virtual Console re-releases and its Nintendo Land mini-game, Mute City and Big Blue courses in Mario Kart 8 and the Captain Falcon amiibo have all contributed to this. Shin’en Multimedia has capitalized on the hype and delivered a game that not only serves as a competent alternative, but offers its own identity and stands its ground as a unique racer on Wii U.