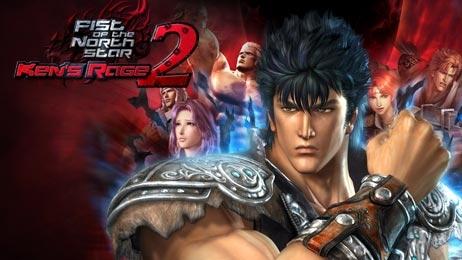 Ken’s Rage 2 is Tecmo Koei’s celebration of Fist of the North Star‘s thirtieth anniversary; a Japanese manga series which has seen various video game spin-offs dating back to the NES and Game Boy days. As far as anniversary celebrations go, however, it’s not really all that good.

Before even deciding on a purchase, you’ll be frustrated. Perhaps not by the game itself, but certainly in its price point. In charging £50 for a digital-only title, Tecmo Koei is undoubtedly alienating the series’ loyal fans – with no cheaper retail alternative available – and making those who may be a little intrigued by the series consider spending their hard-earned eShop credit elsewhere; and let’s be honest, the Wii U’s digital store is hardly lacking in affordable, quality software.

Onto the game itself then, and Fist of the North Star: Ken’s Rage 2 looks to be your run-of-the-mill beat ’em up, with a neat comic strip aesthetic for the cut-scenes, using in-game albeit non-animated graphics that serve as the only real link to the manga; story aside.

As you delve into the game, however, it won’t take you long to notice that it’s one hell of a slog. The gameplay sees you running through a linear corridor-like world until you encounter the next batch of opponents; at which point the game throws literally hundreds of identical enemies at you – all of which are easily dispatched by the mashing of X and Y for Normal and Quick attacks (honestly, we still don’t know which button does which) whilst a push of the A button speeds up the process in that it unleashes a special attack when your Karma meter is full.

Every so often, the game will throw a ‘Commander’ (an enlarged enemy with a bigger health bar) or a mini-boss at you, or tasks you with defeating as many adversaries as possible within a time limit, presumably in an attempt to shake up the gameplay a little, but it really doesn’t work. After just a few hours of play, when you eventually do stumble across a boss that shakes things up – by implementing quicktime events which trigger mid-battle cut-scenes, for example – chances are you’ll be so fed up with the game’s formula that it’ll feel like just another obstacle in the way of getting this game over and done with.

Fist of the North Star: Ken’s Rage 2 (Wii U) Verdict

In the game’s defence, the fact that it boasts a solid frame rate whilst the screen is cram-packed with enemies is rather impressive, and fans of the series will likely find a lot of mindless enjoyment in its lengthy campaign and online modes. Sadly, this game’s price tag, plus monotonous gameplay, mean that it’s near-impossible for us to recommend it to anyone other than the most die-hard of Fist of the North Star fans. Ken’s second bout of rage is indeed justified.