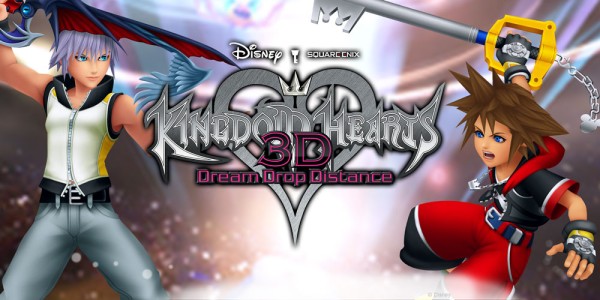 Kingdom Hearts 3D, for those unaccustomed with the series, is the seventh game in Square Enix’s action-based franchise which blends Disney’s lovable characters and worlds with incredibly deep, and often confusing RPG elements from the developer’s own Final Fantasy series.

In the game you play as Sora and Riku alternatively throughout seven Disney-themed worlds, which each have their own mini-stories following the likes of Quasimodo and Esmeralda, Sam Flynn and Quorra, as well as Pinocchio and Jiminy Cricket. Each of the worlds are reasonably unique, and often show off the game’s beautiful graphics and impressive 3D effect – but more on those later. What detracts from playing through each of these worlds is the fact that you must do so twice: once each with both characters. Admittedly, the story and objectives are different both times, but you are ultimately running through the same areas and battling the same enemies twice over.

The way this is handled is through the new ‘Drop’ mechanic, which switches you between Sora’s and Riku’s dreams every time your Drop Meter depletes, or you pause the game and touch the ‘Drop’ button. Whilst this goes to some length to ensure you don’t progress too far through the story with one character whilst leaving the other behind (the two stories to intertwine), the fact that you can drop whenever you please does detract from the meaningfulness of the timed Drops. And when you also consider that when you Drop, you’re forced to restart from the beginning of the room or area – even if you’re right at the end of a boss battle – the inclusion of this feature becomes even more questionable.

As if keeping track of what’s effectively two games wasn’t enough for you to get your head around, there’s more: unless you’re a truly seasoned fan of the Kingdom Hearts series and played pretty much all of the previous games, there’s a strong chance you won’t understand a majority of what’s going on. Square Enix has acknowledged this, however, and provided unlockable ‘Flashbacks’ and ‘Chronicles’. The former are remade cut-scenes from older games in the series, whilst the latter offer read-ups of what’s happened in one of Dream Drop Distance‘s six prequels. Whilst there’s nothing particularly wrong with these additions – they’re required if you want a chance of understanding the story – the cut-scenes are included in what’s already an extremely talkative game, whilst the Chronicles get in the way of the gameplay to a larger extent than we would’ve liked.

When it comes down to the gameplay, it’s Kingdom Hearts‘ traditional combat system, with a few new welcome additions. There’s the main attack which, as you’d expect, sees Sora and Riku whacking the enemy Dream Eaters with their commonplace Keyblades; and there’s the magic attacks which are assigned to one of up to ten slots on the Command Deck, which is then scrolled through on the D-pad, before being activated with the X button. These magic attacks need to be recharged before they can be used again, with more powerful attacks requiring a longer recharge time. New attacks can be unlocked in chests hidden throughout the game’s worlds, or purchased from shops; the sheer number to choose from meaning you’ll need to jig around and experiment with a variety of these attacks quite frequently if you want the upper hand in battle.

What’s new in Dream Drop Distance is the inclusion of FlowMotion and Reality Shift. Both offer new ways to interact with the environment and offer greater variety when it comes to combat. FlowMotion lets you spin around lamp posts and grind on rails to get around faster, as well as, upon doing this, temporarily allowing you to make use of more powerful attack moves. Reality Shift is also a great new addition: when you push the A and X buttons (or swipe down on the touch screen) when you meet certain requirement during a battle (or approach a ‘Reality Shift-able’ barrel or other item), the game pauses, moves down to the bottom screen, and starts a small mini-game which can open up paths, or inflict massive damage on groups of Dream Eaters. Thankfully, all of the Reality Shift mini-games are well executed, and offer another breath of fresh air for the series.

Being an RPG, you naturally have a party of friends accompanying you on your journey. Whereas in previous Kingdom Hearts games you are joined by the likes of Mickey Mouse and Donald Duck, this time you ‘create’ your own party of friendly Dream Eaters known as ‘Spirits’ (the enemies ‘Nightmares’). There’s also another set of mini-games attached to the Spirits, this time AR-based, and not nearly as well-done as Reality Shift’s, sadly. Basically, you can pet your Dream Eaters on the touch-screen, Nintendogs-style, or play games with them using items you’ve found in-game. This levels up your characters, changes their nature and increases their ranks, although thankfully, they aren’t required to finish the game as your allies’ stats do increase at a feasible rate during battles.

Finally, as we touched upon before, Kingdom Hearts 3D‘s presentation is impeccable. The visuals are in no way realistic, but nothing short of lovely; the 3D effect put to stunning use in complementing the gorgeous graphics. The soundtrack is also fantastic, comprising of an orchestral score which goes hand-in-hand with what’s on-screen at any given moment.

All in all, Kingdom Hearts 3D [Dream Drop Distance] is essentially the traditional Kingdom Hearts game that fans know and love, built from the ground-up for the 3DS. If you’ve never been interested in the series before, there’s nothing particularly new to win you over here; with the convoluted story this game was clearly not made for newcomers. Yet it’s the small new additions that will please long-term fans, and make this a must-have game for their 3DS collection.