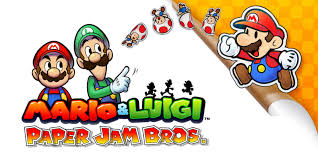 The story begins with Luigi inadvertently stumbling upon the book that houses the entire Paper Mushroom Kingdom, and in true Luigi fashion, accidentally spreading its contents across the real Mushroom Kingdom. Paper Toads, Paper Goombas, Paper Peach and even Paper Bowser find themselves in a world populated by three-dimensional doppelgängers. This is the basis for the crossover, and it’s implemented with care and a great deal of attention. The dialogue between beloved Super Mario characters and their Paper counterparts is a joy to read, and the two series’ staple character designs are stark and striking in comparison – yet never look out of place in the vibrant overworld.

Paper Jam Bros. is the fifth game in AlphaDream’s Mario & Luigi series. While the addition of Paper characters keeps things fresh, the gameplay is refined to the point of near-perfection. The game respects players’ time in an admirable manner, and this is demonstrated from the get-go. You’ll have the option to skip the talkative tutorials if you’re familiar with the series, while newcomers will be made more than welcome with a variety of optional extras which make the game more accessible than ever before.

An Easy mode will make enemies easier to defeat and the Mario Bros. more formidable to conquer, but it feels irrelevant unless you plan on passing your 3DS to a five-year-old player. But then, this serves to remind us of the impeccable balancing found within. It’s paced wonderfully as an RPG: you rarely need to grind to progress and the enemies you encounter are consistently well-matched.

Perhaps most importantly, the battle system is engaging to the point that you’ll never tire of running into the Mushroom Kingdom’s critters. Your party will consist of Mario, Luigi and Paper Mario; the three characters can attack by themselves, or perform a number of Bros. or Trio attacks. To say that Paper Jam Bros. is a turn-based RPG would be a disservice. While the three heroes and up to three foes do take it in turn to land attacks, you’re never without something to do. Each attack, in fact, serves up a micro-game of sorts, as you’re tasked with timing button presses to land more powerful moves, or indeed to avoid completely missing the attack. When it’s your enemy’s turn, you can still control your characters and are encouraged to not only dodge, but counter-attack by leaping onto the attacking adversary’s head, or with a timely swing of the hammer.

Battles are certainly interactive and playful by nature, yet many new mechanisms are at work behind the scenes. Buying and equipping new equipment naturally powers up your characters; Paper Mario can produce five copies of himself, acting as a pseudo-shield, while Battle Cards are perhaps the most interesting new addition. You can purchase these cards from the Toad shop in each town; three are then dealt at random onto the Nintendo 3DS’s touch-screen during battles. Provided you have enough Star Points – which are earned by completing basic activities during battles – you can play one into the battle for one of various power-ups. Battle Cards can boost your XP, deal a certain amount of damage to your foes, or replenish some of your own HP. More powerful cards unlock as you progress through the game, yet these consume more Star Points when you decide to take advantage of their benefits. With so much to think about, you’ll never once find yourself sitting and waiting for it to be your turn. This is one area in which AlphaDream excels, and easily puts Pokémon’s battle system to shame with its engaging mechanics.

And just when you think you’ve mastered the battle system, Mario & Luigi: Paper Jam Bros. goes and throws in all-new Papercraft Battles. Those hard-working Toads – and Bowser’s evil minions – find themselves somewhat inspired by the Mushroom Kingdom’s new Paper residents, and build huge papercraft figures based on Mario and co, and a number of infamous foes. These battles completely throw all RPG elements out of the window, and focus entirely on a real-time combat system. And the surprising part? They work so well. If they weren’t in here, nobody would say “this game is missing something,” but their presence just goes to show much has gone into providing a unique and worthwhile experience that, again, respects you for every second that you spend with it.

Even outside of battle you’re always kept on your toes with new toys to play with and new mechanics to work with. Despite its linearity, Paper Jam Bros’ story will often leave what feels like the beaten track and take you on a wild ride of surprises. At times, it almost feels like a 3D platformer of years gone by. You’ll also get thrown into missions to progress the story, although these often feel like filler. The game will lock you into a small area and ask you to find all the scared Paper Toads – sometimes against a time limit. Occasionally, other well-known characters are leveraged in: Yoshi will challenge you to a race, and Wiggler will refuse to let you pass until you gather up a load of fruit, but these often feel like a simple game of hide-and-seek. But everyone loves hide-and-seek, right!?

It’s fair to say that these don’t appear so often as to detract from the overall experience, and it’s a general pleasure to traverse the overworld, seeing everything that AlphaDream’s latest rendition of the Mushroom Kingdom has to offer. The presentation isn’t quite as polished as, say, Super Mario 3D Land’s, but the colourful art style is easy on the eye; corrugated cardboard artefacts from the Paper Mushroom Kingdom serve as platforms and obstacles, subtly reminding the player that this is actually a crossover.

In some ways, I was reminded of Super Mario RPG: Legend of the Seven Stars. Paper Jam Bros.‘ dialogue and Nintendo’s localisation efforts are astounding, and its sense of humour is executed with finesse. I feel that everything flows so naturally, in a way that finally gives Square’s SNES classic a run for its money.

Nintendo is publishing two RPGs this week. Xenoblade Chronicles X will be turning heads for its technical accomplishments, while Mario & Luigi: Paper Jam Bros. deserves to be picked up by fans looking for something a little more lighthearted; something witty, fun, and a pure joy to play. Paper Jam Bros. doesn’t look like anything new on the surface, but it’s one of the most engaging games I’ve played this year. There’s no denying that AlphaDream has finally nailed its RPG formula – and brings Paper Mario along for the ride.

AlphaDream has refined its RPG formula to near-perfection and delivered a modern classic in Mario & Luigi: Paper Jam Bros.