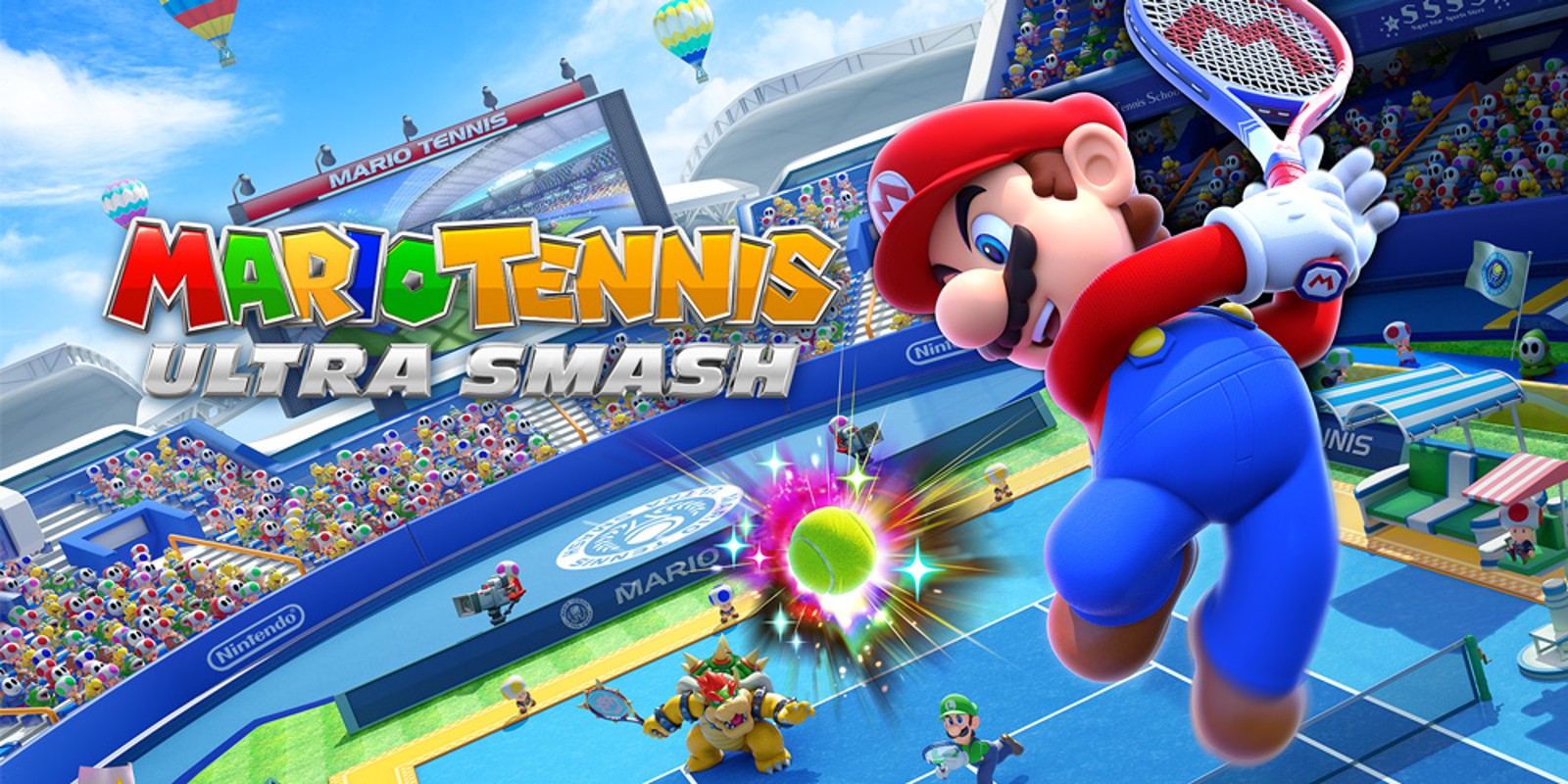 The Mario Tennis series has become something of a cult classic for many players, thanks in part to the developer’s ability to create hyperbolic sports games that feel right at home within the Mushroom Kingdom, while never straying too far from the traditional sport’s rules. Ultra Smash is the first Mario Tennis game I’ve dabbled in, but even I couldn’t help but feel that something was missing.

The Game Boy Color’s Mario Tennis and its Game Boy Advance sequel both featured story modes that had you levelling up a character with RPG-style upgrades, which were awarded after each game of tennis. I wasn’t expecting anything of this caliber in Ultra Smash – it’s a feature that’s only been found in handheld entries, and even Mario Tennis Open on Nintendo 3DS abandoned it in favor of online multiplayer – but would some sort of similar structure be too much to ask for?

There are four game modes to choose from in Mario Tennis: Ultra Smash: Mega Battle, Mega Ball Rally, Knockout Mode and Classic Tennis. As you’d expect, the latter of these options strips the game of its mechanics and gimmicks, giving you the chance to play pure tennis against (or alongside) computer characters and friends. There’s a selection of modifiers to choose from, allowing you to customize the number of rounds played, and for how many matches within that particular game you’d like to play.

The gameplay itself is relatively primitive, with each of the GamePad or Pro Controller’s four face buttons representing a different shot. Whether you want to apply topspin or trick your opponents into running away from the net before executing a drop-shot, it shouldn’t be too long before you’re up to speed. Simplicity doesn’t necessarily equate to a lack of depth, however. In fact, Ultra Smash’s physics are quite deep, and it can take some time to master how to approach each return shot. And as you increase the AI’s difficulty, it becomes clear that the game is more complex than it appears on the surface.

In Classic Tennis, you also have the opportunity to disable Chance Shots. These give you the chance to pull off a more powerful shot; if you press the correct button while standing within a marker, your shot will become a little more powerful or a little more tricky for your opponent to return. Disabling these makes for a pretty average game of tennis, and it’s my bet that you’ll play through this mode ten times in order to achieve a particular accomplishment before never bothering to coming back. Otherwise, they go to some length in keeping the game feeling fresh.

Speaking of accomplishments, Camelot’s incorporated 25 specific challenges that would feel right at home on a PlayStation or Xbox console’s trophy or achievement list. Some task you with winning a minimum number of matches on a specific court, while a majority want you to play through fifteen Knockout Mode matches with a certain character. Regardless of the difficulty or subject of an accomplishment, completing each one unlocks something new within the game – a new court, character, or extra difficulty setting for the AI characters.

Knockout Mode sees you taking on opponents which gets progressively more difficult; in fact, the meat of Ultra Smash’s single-player game is nestled in here, but as I brushed upon earlier, its structure is just plain bad. As previously mentioned, at least half of the game’s accomplishments require you to sit through fifteen matches with every character in the game, yet you can’t transfer your progress between characters. If you wish to collect all the accomplishments, you must re-play the first fifteen stages with every playable character. This proves challenging the first time around, but once your skills are honed and you’ve progressed all the way to round 50 with one character, starting from scratch – against the low-level computer characters – over and over again becomes just plain frustrating.

The accomplishments encourage you to play with all characters, while Knockout Mode encourages you to get as far as possible with one character. It all feels rather contradictory – and then you realise that all the accomplishments can be purchased with in-game coins earned by simply competing in any game mode, with any number of players.

Theoretically, you could play Classic Tennis over and over and buy all of the accomplishments without ever achieving anything within the actual game. When you think about it, there’s little incentive to play Mario Tennis: Ultra Smash at all. It offers a game of tennis that fans of the sport will certainly enjoy, but does little to engage Mario fans aside from its use of characters and, rather bizarrely, the Mega Mushroom.

At certain intervals during a Mega Battle – and in most Knockout Mode stages, for that matter – a bystanding Toad will throw a Mega Mushroom onto the court. As with New Super Mario Bros. on Nintendo DS, collecting this power-up enlarges your character, and in Ultra Smash, it gives them near-full coverage of the court. As a standard-sized character, it becomes almost impossible to bypass a Mega-sized opponent as even successful Chance Shots or Ultra Smashes – the most powerful shot – can be easily returned. It’s a somewhat interesting tweak to the gameplay, but as a power-up it feels limited by nature due to the fact that it’s dished out evenly and not used as a sort of “catch-up” feature for weaker players. Singles matches become one-sided when one player has the Mega Mushroom; when both players are powered-up it becomes a stalemate in terms of statistics – ultimately relying on player skill to defeat the opponent. In doubles matches, only one player per side can collect the power-up, leaving the normal-sized player “largely” obsolete. As it’s the only power-up from the entire Super Mario universe to appear, one has to wonder whether it was shoehorned in last minute. Its clumsiness certainly suggests so.

Even the courts lack the charm that previous entries have boasted. The selection available is varied, and each court does alter the gameplay to an extent. For example, the Sand court notoriously decreases the ball’s bounciness significantly and the Ice court sees legged characters skidding around while Boo and co. remain unaffected. It’s nice to have such variety in the gameplay – arguably where it counts – but the surroundings never change; the same generic tennis court pales in comparison to the variety seen in previous games. Where’s Luigi’s Mansion, or Sherbet Land?

The main new addition here is the inclusion of amiibo support. In fact, if you’re planning to genuinely complete every accomplishment, you’ll probably need one. Knockout Mode allows you to bring along an amiibo character which levels up and receives a random upgrade after every five matches. It gives you something of an unfair advantage to begin with — you play as a doubles team versus a single AI character — but I don’t think I could’ve surpassed round 30 without my beloved Wario figure by my side. Ranking him up, and seeing him develop the skills to return even the most powerful of Ultra Smash shots, was almost an emotional affair.

Mario Tennis: Ultra Smash does exactly what is says on the tin. It’s a great game of tennis, sure, but Camelot has failed to capture what makes a Mario spin-off special. It can only truly be recommended for those who are sure to have friends to enjoy its multiplayer modes with. Even then, little has been done to ensure its mechanics stand the test of time — with dull match variations and a general lack of things to see and do. For multiplayer mayhem that leverages Nintendo’s IP in a worthwhile manner, see Mario Kart 8, Super Smash Bros. or even Splatoon. Or, perhaps save some money and give eShop gems Runbow or Starwhal a shot for your next party gaming session.

In addition to the game modes covered above, Mario Tennis: Ultra Smash features an Online mode – as you’d expect of any sports game in 2015. Although the servers were live pre-release, I was unable to play online due to a lack of players, despite numerous efforts.

Now that the game’s available to the public, there’s some additional information you should know, as it may influence your decision to purchase the game.

First and foremost, Ultra Smash’s online modes are as barebones as they come. You have the option to play Classic Tennis or Mega Battles with either worldwide players, or fellow players from your region. And that’s it. There’s no option to play matches with anyone on your friend list. If you’ve trained amiibo in Knockout Mode, however, you can take them online and use them as your doubles partner.

The ranking system seems as though it’s been pulled straight from Mario Kart Wii. You start with 2000 points, and this number rises and falls depending on how you fare against online players. There’s no true ranking system or rewards earned for performing well, and because you can’t play with friends, there’s little incentive to play at all; the AI characters in later Knockout rounds are likely to provide more of a challenge than a rookie player online.

My review score hasn’t changed as it was based on the content that I did play. The inclusion of online multiplayer is passable at best, but doesn’t detriment the package as a whole. Considering the support that Nintendo’s put behind online titles such as Super Smash Bros., it’s certainly a shame that Camelot hasn’t done the same for Mario Tennis.