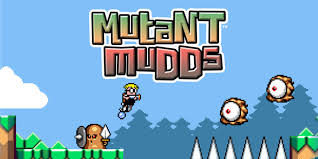 The Nintendo eShop has already played host to an array of 2D side-scrolling platformers, from the Super Mario Land trilogy via its Virtual Console service, to the excellent Mighty Switch Force! from WayForward: from the original monochrome Mario titles to the modern, brand-new, action-packed puzzle platformer. What Mutant Mudds offers, however, is a striking cross between the two. From the developers behind first-person DS shooters Moon, Dementium and its sequel, Mutant Mudds sees Renegade Kid taking on a completely new genre and, quite frankly, getting it absolutely spot on.

The gameplay itself harks directly back to the retro days of the NES and the SNES, basically tasking you with navigating from the left to the right side of the screen without dying. As you’d expect, there’s a jump button to navigate the platforms, but the protagonist Max is also equipped with a gun and a jetpack – the first used to wipe out the Mudds that have invaded, whilst the latter allows Max to hover for a short time, enabling access to otherwise-unreachable platforms and collectibles. So far, not so revolutionary, but what’s there is fantastically implemented to make this a very challenging game. You will die in Mutant Mudds, and you will die a lot – especially if you’re considering going for 100% – but every time you take that third hit which fully depletes your health bar, you’ll see where you went wrong, and subsequently be able to focus on getting that little bit further. For a game with reasonably sizeable stages yet no checkpoints, that ‘one more go’ factor has a lot to offer here.

That said, the game’s main gimmick, which involves using launchpads to fling yourself into the background or foreground, had a lot of potential, but is unfortunately extremely limited. Unlike in Mighty Switch Force! where you utilised the ‘switch’ mechanic whenever it was required, you can only hop from front to back when there’s a launchpad around – and their appearances are somewhat rare. This means that there’s no hidden platforms for you to find, and no obstacles specifically requiring you to be stood on a certain plane at a certain time. In fact, its only practical use is as a showcase for the system’s 3D effect, which we’re pleased to say is put to fantastic use in this game. You can play in 2D, but it’s no where near as immersive. When the 3D is slider is pushed to the top, the depth of field added to the game is fantastic, with background platforms appearing to be literally inches further into the screen than they are. When you’re in the foreground, Max is extremely close to the camera which does make seeing where you’re headed slightly more difficult, but the enlarged 2D sprites look really crisp in the foreground as the world passes by at the back.

In terms of length, we’ve read elsewhere online that the game is short on content, but we’d have to disagree. For £8.10 (many will scoff at that price) there really is plenty of bang for your buck. Inside each of the already-challenging sixteen levels in the first four worlds are hidden one hundred Golden Diamonds – all 1,600 of which are required to unlock the final world, which consists of another four levels filled with said shiny collectibles. And then in each of the twenty standard levels are hidden doors. Finding and entering these take you to bonus levels, meaning there’s more than double the number of levels you’d expect upon initially starting the game. What’s extra nice, though, is that these levels are entitled G-Land and V-Land, each one respectively harking back to the graphical styles seen on Nintendo’s Game Boy and Virtual Boy systems – the former ‘boasting’ green-tinted monochrome levels, with the latter’s being red and black. These levels are somewhat shorter than others in the game, but offer a much greater challenge, and add some variety to the otherwise colourful, vibrant levels.

In conclusion, Mutant Mudds is a fantastic 2D platformer that feels that it could’ve come straight from a first-party Nintendo studio. Anyone that might not enjoy the genre won’t be won over by the game, but for those that do will lap this up and revel in its challenging gameplay and tight controls. It’s just a shame that its leading gameplay quirk wasn’t taken as far as it could have been.