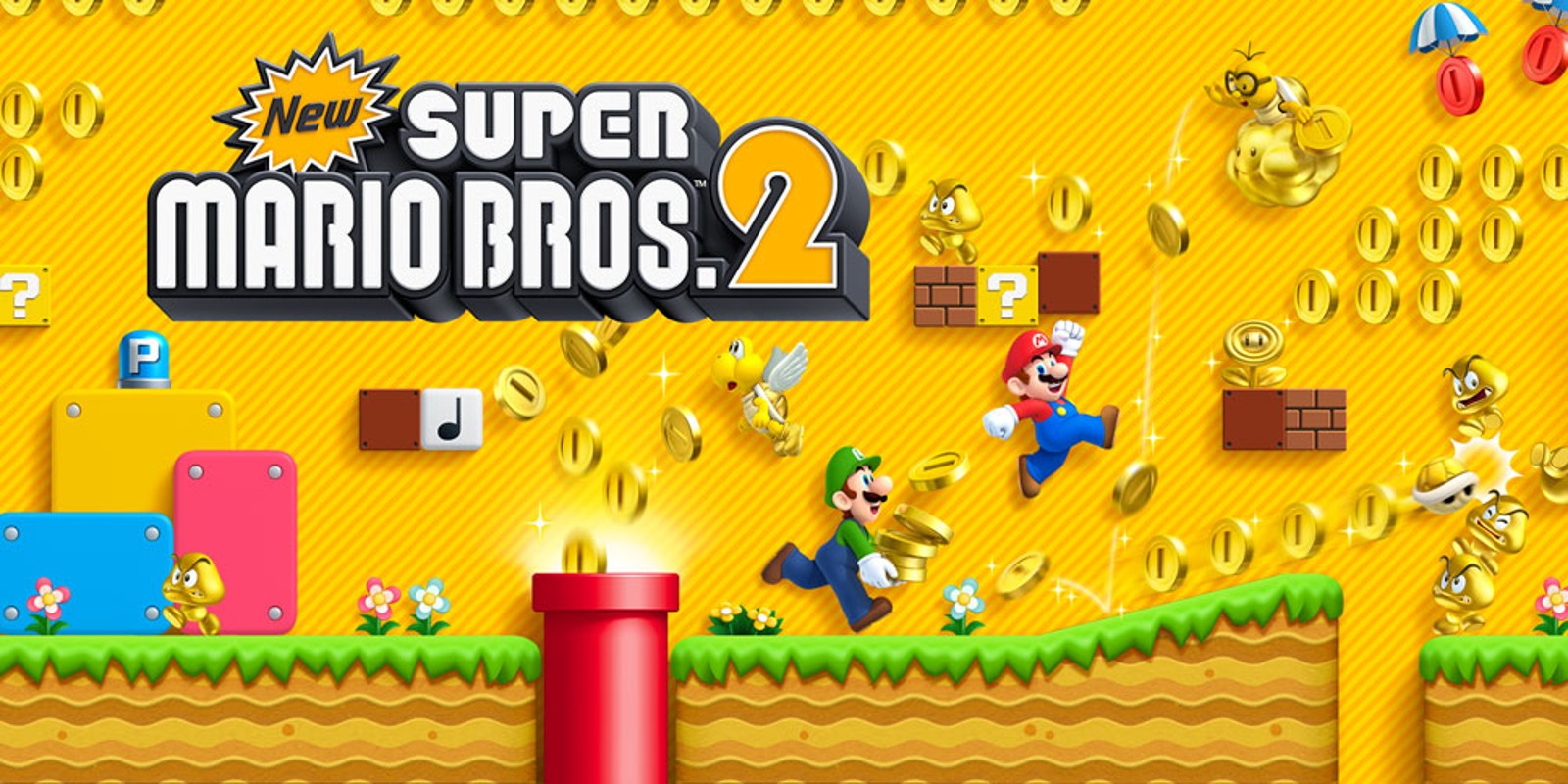 If last year’s Super Mario 3D Land was the first step in a bold, new direction for the Mario franchise – blending 2D and 3D gameplay to create a new Mario sub-genre, described by the game’s rear cover as “a pick up and play Mario adventure” – then New Super Mario Bros. 2 is the polar opposite.

Where the plumber’s 3D outings have always been revolutionary, often implementing some sort of new gameplay mechanic and twist to the formula, there’s no denying that the two New Super Mario Bros. games have played it extremely safe – and why shouldn’t they? Despite being all pretty familiar, they are a blast to play through, can be challenging at times and, more importantly for Nintendo, they sell extremely well.

On to New Super Mario Bros. 2 – somehow the third instalment in the series – and Nintendo has finally attempted to shake up the 2D Mario formula with coins, coins, and even more coins. We say attempted because, sadly, this new innovation is somewhat hit and miss.

Admittedly, the new focus on coins – and the one-million coin goal – adds a new dimension to the gameplay, challenging you to not only reach the flagpole, find the Star Coins, and find any secret exits hidden away, but also to make the effort to collect any loose coins you may have otherwise ignored had this been an earlier entry in the series. There’s also a variety of returning power-ups that have been revamped to help you obtain extra coins – the Golden Fire Flower, and the Golden Block which Mario wears on his head, for example. The former allows our moustachioed protagonist to turn enemies and blocks into a number of coins, while the latter appears when you ground-pound certain blocks, giving Mario a coin when he jumps, sprints, or lands on enemies’ heads. There’s also the gold ring, which turns all enemies into gold versions of their previously usually-coloured selves, which makes Koopa shells leave a trail of coins, and Lakitu throws (how did you guess?) coins rather than Spinies.

So there’s plenty of opportunities for you to get coins, but what are they for, what do they do, and what happens if you ignore them? The result of collecting coins has remained constant in all Mario games since Super Mario Bros. on the NES, and they serve exactly the same purpose here as they did back in 1985: collect one-hundred of the shiny collectibles for a 1-Up, but for the first time, should you manage to accumulate one million throughout your time with the game, then you’ll unlock… something! Rewind to the 1-Ups, though, and yes – it really is as excessive as it sounds. With thousands upon thousands of coins not-so-hidden away in each world, there’s a strong chance your extra lives will be in triple figures upon beating the final boss, and you’ll have noticed that it’s nigh on impossible to legitimately see NSMB2‘s Game Over screen.

So, let’s say you ignore the coins and play through each level whilst focusing on defeating each Goomba, collecting each Star Coin, and snubbing any Fire Flower that isn’t red and green, simply enjoying the game without the gold-obsessed gimmick. Does this detract from the game’s experience? Have the coins been shoehorned in to mask sub-par level design?

Absolutely not. The coins, if anything, are there to give you something other than the samey environments you’ll have grown accustomed to on Wii and DS to focus on. The level design itself, when looked at from the viewpoint of someone who’s never played one of Mario’s New adventures, is absolutely brilliant; although once again extremely familiar for those who’ve played any of Mario’s other recent 2D platformers.

Similarly, the soundtrack is also very much like what we’ve already heard in New Super Mario Bros. Wii less than three years ago, with some of the jolly Desert and Snow world music, we’re sure, coming directly ripped from Wii‘s disc. Once again, definitely not bad, but it would’ve certainly been nice to have something completely original to accompany Mario’s latest journey through the Mushroom Kingdom.

And if you’re wondering why we haven’t made much of a fuss over the graphics (yet), then – you’ve guessed it – that’d be because NSMB2 seems to run on the exact same engine as its 2009 Wii predecessor. Aside from the lost resolution and slightly blurry backgrounds thanks to the transition to the 3DS’s smaller screen, the graphics are what you’d expect from a 3DS iteration of the New Super Mario Bros. series: a sort of middle-ground between the DS original and the Wii sequel.

The graphical concerns are addressed to an extent by the 3D effect, however. Whilst obviously not as significant as actual anti-aliasing, pushing the 3D depth slider up adds little depth to the game, but does actually gradually blur the background making the field of play appear sharper than if you were to play the game in 2D mode and also makes the backgrounds’ low resolution unnoticeable, meaning NSMB2 is as much a joy to look at as it is to play.

Unfortunately, there is one entirely negative aspect to New Super Mario Bros. 2, and that’s its boss fights. Nintendo promised a return to Mario’s roots with the appearance of the Koopalings paying homage to Super Mario Bros. 3. However, whereas 2D Mario games on systems gone by have all featured new and exciting battles at the end of each world, NSMB2 often rehashes the boss battle from World 1’s Fortress stage, with only slight adjustments to the difficulty made throughout. When you consider the two unique boss stages in each of Yoshi’s Island‘s eight worlds (available for free to Nintendo 3DS Ambassadors) the lack of originality in NSMB2’s Koopaling fights really is inexcusable – and when you do come across a new gameplay quirk in a Fortress or Castle stage, chances are you’ll blitz through it in a matter of seconds.

Overall, New Super Mario Bros. 2 doesn’t offer a brand-new way to play side-scrolling Mario games, but the new-found obsession with coins does provide enough of a distraction from what’s essentially a rehash of the previous New Super Mario Bros. games. If you love Mario, and/or aren’t fussed about collecting thousands of coins, you’ll still love what is a great platformer at its core – we just need to hope that New Super Mario Bros. U goes the extra mile to deliver an original 2D Mario game that’s true to the word ‘New’ in its title.