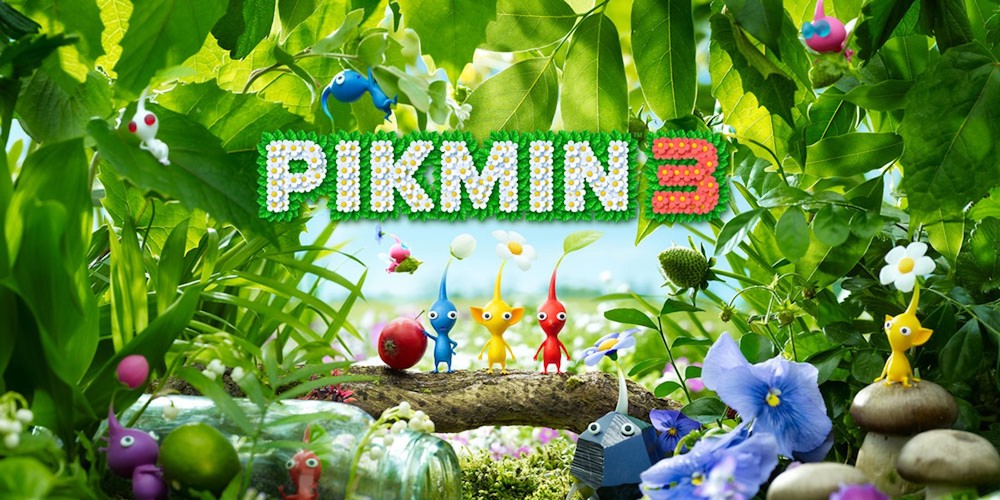 Pikmin 3 is tough. You’d think that a game so colourful and cute would be marked up to “just another of Nintendo’s Kiddy Franchises,” thrown into the “rehashed series” bin and forgotten about. “It’s the same game as the last two, isn’t it? Why bother with it?”

I’ll tell you why. It’s one of the most intense, stressful games I’ve ever played in my life. One that manages to carry a heavy weight, a looming deadline, but still keeps things manageable. It’s the perfect balance.

Pikmin, for those who don’t know, is a series centered around commanding (enslaving?) an army of specialized plant-men to help you with whatever specific objective you need to accomplish. The original Pikmin was about the bold Captain Olimar crash landing and having to find his ship parts and leave within 30 days, lest his precious air supply deplete. Pikmin 2 was about the same Olimar returning home only to find his planet in financial ruin. With the help of his partner Louie, they return to the planet and find treasure – enough to bring their home planet of Hocotate out of the debt they’d accumulated.

In regards to Pikmin 3, I can’t say I was impressed with the new story arc. A new crew crashes into the same planet, wanting to save their starving home by scavenging fruits. This made the story a little bit disappointing and dry, but the data files found around the planet bring to life a complete new arc of its own, connecting the new and old crews, which is incredibly exciting if you’ve played the GameCube originals.

As the game progresses, you find yourself in the possession of three different captains, each one able to lead Pikmin to different areas. Having two different captains in Pikmin 2 seemed extremely overwhelming at times, what with having to control both at once, and – while controlling three may seem daunting – this is where I felt the Wii U’s brilliance really begins to shine. By using the GamePad as a mini-map, you’re able to oversee every uncovered place of the area where you’ve landed. You’re then allowed to pause the game, plan your day, and begin. The captains can move places simply by tapping on the screen and giving the command, and an overhead view of the area lets you see what’s going on constantly, and at the end of a day, you can replay your trip and try to trim down any unnecessary mistakes you may have made, going so far as being able to travel to any previous days to tighten up your schedule. The three captains will sometimes pop text out on screen to let you know they’ve arrived at their designated location, or to let you know that your Pikmin army is in trouble. It works wonderfully well when using the Wii Remote and Nunchuck with the GamePad sitting in your lap.

On the other hand, they’ve also given you the option of using only the Gamepad/Pro Controller to control. If you’ve played the GameCube titles before, you should be familiar with how it handles. The trajectory and aim of your throw is controlled with the left thumb stick, as well as your movement, meaning to throw at a specific area, you have to circle around to make sure your target is lined up with where you want it to be. It’s entirely frustrating, given the precision you’re sometimes required, however, to switch in between the control schemes is instantaneous, so even if you are struggling, all that’s required to do is press a button on the controller you want to use and off you go.

On a side note, they’ve also allowed Off-TV play with the GamePad by simply pressing the minus button on the controller, and it works insanely quickly  to change between the two. However, you are not burdened to play with the GamePad controls if you’re Off-TV, as they’ve finally found a use for the Infra-Red sensor built into the controller, meaning you can still use the Wii Remote/Nunchuck controls solely on the GamePad screen.

As far as the graphics go, they’re completely stunning even for a game that was developed originally for the Wii, finally proving that the Wii U is definitely a powerful machine. You’ve never seen such beautifully rendered fruit skin textures before. The ground textures leave something to be desired, although if you’re not in the game’s “Camera Mode” (which is marvelous fun) it’s hardly noticeable. The only issue I had regarding processing power was when I had thrown a bunch of my waterproof blue Pikmin into a pond to attack some swarming fish, and it seemed that the rippling slowed down the game a tick, Within a second, though, it was running smoothly again.

Another slightly disappointing thing about Pikmin 3 was how much it felt like the other games. I’m not against playing Pikmin 1 and 2, but I was expecting this IP to be the one where they could change it enough from one game to another to make it different enough, but without changing a lot. They pump Mario games out left and right, but this game has been in the works for easily 6 years. Pikmin 1 and 2 were very different from each other, enough so that they felt like completely different experiences. This one just feels like a polished amalgamation of the two which isn’t bad per se, but it’s definitely going to be more fuel for the “Why pay $60 for the same game?” argument.

The only other problem I had had to do with the Pikmin themselves. If I turned a corner too sharply, or for some reason was a little bit too low off of a slope, they would look around completely lost, sit down, and bait themselves to be eaten at day’s end. The random idling left a sour taste when I would take off in my ship for the evening, only to see two or three Pikmin running away from the planet’s nocturnal enemies. It was wholly frustrating, and having to whistle at them just to keep them alive before the clock reached 0 was annoying. I’m sure a Pikmin in real life could take a corner easily enough and see me standing a few inches away.

Along with the addition of another captain, there are two new Pikmin types: the black rock and pink flying types. Both are used extremely well, with the rocks smashing through glass and the flying ones being used in conjunction with blue swimmers to cross lakes and rivers. They’re a welcome addition, and proved time and time again that they were definitely able to hold their own on the battlefield.

A mission mode is also included, ranging from boss rushes to treasure hunting, and all of the different types of available missions will keep you interested in the game even if you don’t feel like trimming time off your story expedition. The addition of online score leaderboards leads to a healthy level of efficiency in your runs. Along with the missions is a multiplayer “Bingo Battle” mode, where finding the right fruit is key to winning. It’s another incredibly fun, welcome multiplayer addition after Pikmin 2‘s battles.

Pikmin 3 has struck an amazing balance between the intensity of Pikmin, and the exploration of Pikmin 2. In Pikmin, the thirty day time limit was daunting and scary, and in Pikmin 2, there was no time limit, but the enemies and puzzles were much bigger. Pikmin 3 has a time limit of sorts, making sure you have food for the next day, and huge enemies and puzzles, but keeps the experience streamlined and focused while lending multiple ways to go about your routine. There are no underground caves like in Pikmin 2, but there are giant bosses strewn about the map, and killing them can sometimes take days of in game time, depending on how efficient you are with your squads. You can use your 3 captains any way you want, having them split up with separate groups, or marching around with all of them together. You don’t have to multitask, but a little bit of the intensity I’ve mentioned is lost without it.

Overall, Pikmin 3 doesn’t revolutionise the series, only contributing a couple more things to it, but is finally the beginning of what seems to be a long run of worthy Wii U titles. Its streamlined tension and manageable play style, as well as the ability to change any mistakes you made extremely easily make this game worthy to be in your hands.  The glaring issues, being the GamePad controls and the random Pikmin idling, are both easily avoidable enough, but hinder the game somewhat if you don’t know what you’re doing. The lack of innovation on the series will bog down the experience as well if you’re looking for a radically different Pikmin game, but in any case, it’s a must buy for the game starved system, and you will not regret for one moment picking it up.