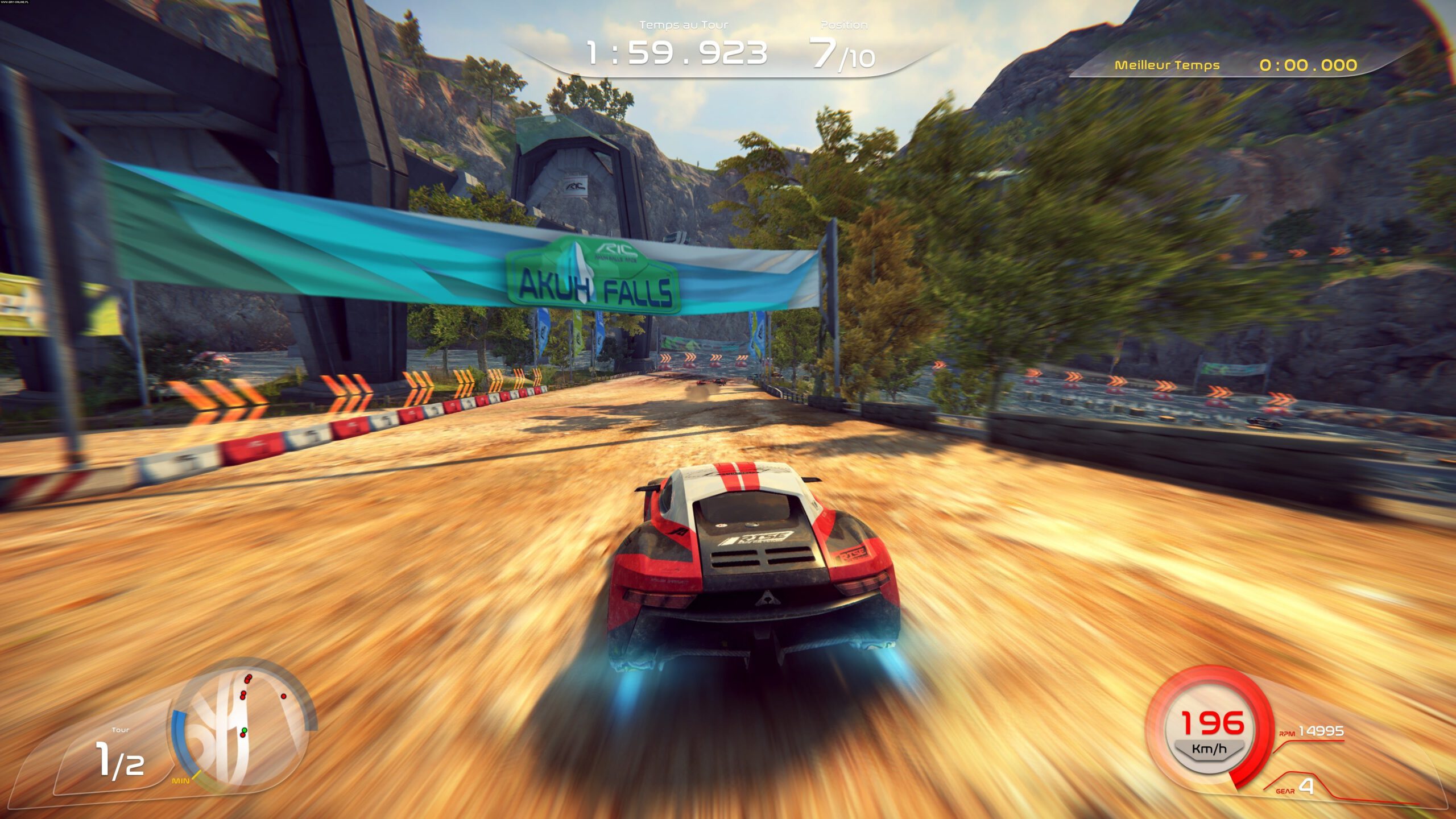 Rise: Race the Future is actually the first home console game released by VD-Dev since the studio’s 1992 debut title, Jim Power in Mutant Planet (although it can of course be played on the go thanks to the Nintendo Switch hardware) and also its first racing game of the current generation.

Despite VD’s longevity in the industry, the first note that I took during my time with the game was a negative one – and this happened before I’d made it into the actual gameplay. The main menu consists of a standard vertical list, which you can navigate with the D-pad. So far so good. However the difficulty option is highlighted at the bottom of the screen, with the left and right arrows accompanied by icons representing the controller’s ZL and ZR buttons. Pushing these shoulder buttons did nothing. I’m only a little ashamed to admit that I found myself questioning whether my Joy-Cons had broken, before realising that you have to use the D-Pad to navigate off the main menu and onto the difficulty selection; only then do the shoulder buttons activate, and you can switch the game’s difficulty setting. It’s a minor grievance, but representative of the game as whole: full of small niggles which collectively detriment the enjoyment you’ll find within.

With that little aside out of the way, the gameplay itself feels like the handheld racing game VD-Dev wanted to make a decade ago. If you’re a fan of an old-school Ridge Racer, or miss the glory days of Sega Rally Championship, Rise: Race the Future is a leap into the future for the independent development studio, with modern visuals being a highlight when the Switch is hooked up to a TV.

Realistically, the word “Future” in the title comes from the futuristic vehicles which have a plethora of modern gizmos – such as the ability to drive on water, ice, dirt or tarmac with very little change to the car’s handling. Whether this is an authentic look into the future of motorsport or a lack of physics models is questionable, but it makes for an eye-catching spectacle that entertains as water splashes hit your the screen and obscure your view.

And as is the case with any good futuristic automobile (or arcade racing game), the cars also sport a boost system with three different deployment options. This isn’t on a per-car basis, but you can select how you’d like the boost work before each race. You can let it recharge gradually whilst your vehicle is travelling at over 78mph – which felt the most natural as an avidPS2-era Need for Speed player – or you can be given three boost bars at the start of each race to be used as required, albeit without the ability to recharge. Finally, you can opt into having your boost recharge as you drift, however this is no Mario Kart and without an explicit drift mechanism you’ll undoubtedly end up losing more time than you’ll gain in attempting to pull off a slide – especially when the tracks are mostly high-speed affairs.

Each race suits handheld play quite nicely, but lacks depth as a result. There’s only two laps per race, yet a big chunk of the user interface is dedicated to highlighting your current lap time and the fastest lap of the race – which is an odd design choice as the second lap will almost always be the faster of the two due to a standing grid start on lap one.

Opponents almost feel more like obstacles than competitors, as they appear to be programmed into a set route and won’t take defensive measures into a corner, nor will they swerve to avoid you if you’re travelling particularly slowly on the racing line. This was the cause of much frustration on more than a couple of occasions too, as one little bump from a following car is enough to send you into a spin, and the procession of opponents to march on past, leaving you in last position and often without enough time to fight back. Conversely, if you’re sitting pretty in second and don’t think you can make it around the outside, you can try to give the car ahead a little nudge and chances are they’ll be forced into a spin and left in your dust.

The ability to restart a race at any point takes away any risk and reward balance, and negates any of the would-be tension in sending a last-ditch overtake up the inside of a competitor, or racing wheel-to-wheel as you hurtle towards the finish line.

There are plenty of tracks and cars to keep you busy, but without a multiplayer option to negate the dim AI opponents, it’s a case of whether this content does enough for you on a personal level to keep you entertained as a solo player. Save for the HD visuals, Rise feels like it’s come straight out of the nineties. If you’re craving an old-school racer then this will scratch that itch, but in a world where Forza Horizon 4 exists it’s all a far too pedestrian. There’s not enough style nor substance to warrant a recommendation.