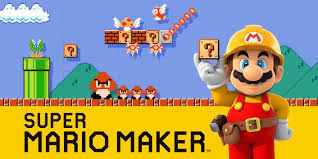 Super Mario Maker begins by throwing you straight into a pretty basic Super Mario Bros.-themed stage. You’ll hop across Goombas’ heads, collect a Super Mushroom from a Question Block and hum along to the classic theme tune. But before you reach the end, you’ll be faced by a bottomless pit and no way to overcome it. Leap into it and you’ll be informed that the Creator forgot to finish off the stage. And so begins the tutorial.

You’ll learn to place Piranha Plants in Warp Pipes, give a set of wings to a Koopa Troopa, and swipe the stylus across the GamePad’s touch-screen to create platforms. Then you’ll jump back into Play mode and complete the level you’ve just created. And that’s as far as the tutorial goes.

It’s unlikely that you’ll be overwhelmed, however. Only twelve items are available on day one, with new “deliveries” arriving daily on the condition that you spend enough time in Create mode. It’s definitely an interesting way to get players coming back day after day, but that idea for a super-complex Castle stage of yours will have to wait until you have more items at your disposal. It’s not just items that arrive on a daily basis, either. Some days you’ll receive a different course template – such as the Castle or Underwater skin – while Super Mario Bros. 3 and Super Mario World themes are also unlocked in this fashion.

If you’re looking for inspiration, there’s a selection of built-in courses designed to showcase some of the creative ways in which you can make use of the items you have readily available. These levels are nothing like the ones you’d find in a canonical Super Mario Bros. game, but instead focus on demonstrating gimmicks that you can hopefully implement into your own, more fully-fledged courses.

It may have been nice to have some “true” levels from Nintendo’s internal development teams built-in, but then that’s not what Super Mario Maker is all about. The whole package revolves itself around user-generated content, and Nintendo has developed a comprehensive online hub, entitled Course World, that accommodates the latest and greatest community creations beautifully. Before you can publish your own levels to Course World, you must first complete the stage yourself to ensure that it’s actually possible to reach the flagpole. When that’s out of the way, it takes little more than a push of the “Save & Upload” button to send your very own Mario level to Nintendo’s Course World server. From there, it can be played by the masses – and you can see how people are coping with your genius inventions.

It’s games like this where Miiverse really comes into its own, as Nintendo’s social network is embedded into Super Mario Maker to the extent that its functionality feels like a part of the game itself. Comments can be left not only after a course, but also at specific points during a course. This was especially helpful while playing a level called “Metroid U,” which offered plenty of different routes – some of which could only be accessed with the help of a power-up. Elsewhere, exasperated comments popped up as I, too, misjudged wall jumps and fell to my doom, providing plenty of laugh-out-loud moments throughout.

Even if there isn’t a creative bone in your body, there’s certainly a lot of fun to be found in Course World. It’s fascinating to see what players can come up with when given the tools to create anything within the confines of a two-dimensional Mario platformer, and it’s sure to be a long time before the community at large becomes rinsed of ideas. As a player, every effort is made within Course World to ensure it’s easy to find what you’re looking for. “Unpopular” levels are (somewhat harshly) removed from the server altogether if they don’t garner enough Stars from players, while the cream of the crop rises to the top – or at least, that’s the intention. Even pre-release, it’s the gimmicky levels that get featured the most: the ones that showcase each of the unlockable amiibo characters, or the ones that use springs to flick Mario to the flagpole without the need to even touch the controller.

There are plenty of filters, however. You can view the most popular levels in your region or across the globe, and play the current weekly top courses or peruse the best of all time. Nintendo even has its own curated list of courses, although it would almost certainly benefit from stages built by Nintendo staff itself – at least until the more creative types get to grips with the software. Looking forward, Super Mario Maker’s value relies heavily on Nintendo’s ability to keep lacklustre stages to a minimum, while promoting new ideas and unique courses in a timely manner. Whether or not Nintendo can pull this off remains to be seen, but for now, the infrastructure is certainly in place.

10 Mario and 100 Mario Challenge modes go to some length in adding structure to the otherwise sporadic user-generated stages. You’re given either ten or 100 1-Ups, and tasked with surviving a series of random levels taken from Course World. It’s here that you can unlock any number of Costume Mario outfits that are otherwise made available with amiibo – and Toad’s reaction, as you rescue Princess Peach while sporting a Bowser costume, is priceless!

Don’t go into Super Mario Maker, then, expecting to indulge in a never-ending stream of levels of the ilk produced by Shigeru Miyamoto and the development teams at Nintendo. What you can expect, however, is a comprehensive toolset that not only offers everything you need to create your own Super Mario levels, but also encourages you to forget all existing conventions and come up with your own ideas within the scope of four classic platformers.

Creative types that love to tinker will feel right at home with the intuitive Create mode, while Course World has the potential to offer outstanding value for money not only over the game’s launch period, but into the foreseeable future. Ultimately, Nintendo is placing a lot in the hands of its dear community. As the provided tools have their boundaries pushed and players get in touch with their inner course designers, I have a feeling that Super Mario Maker is all set to blossom into something wonderful.