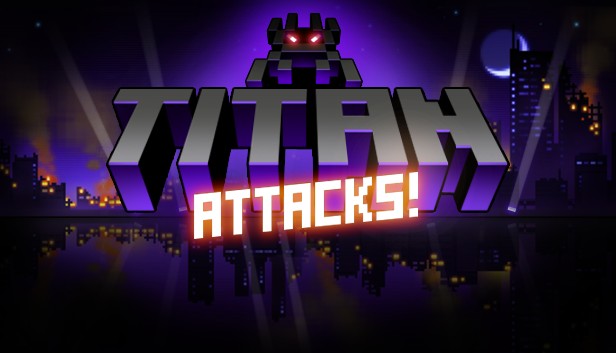 If Titan Attacks! launched forty years earlier, this very review may well have been published on a site called Nindie Titan. Almost every aspect of Puppy Games’ modern arcade-style shooter is built upon Atari’s Space Invaders – but a plethora of additions and modernisations keep Titan Attacks! relevant on 3DS, even though it wasn’t designed for Nintendo’s hardware.

While the gameplay at its core is largely archaic, Puppy Games has gone to great lengths in stretching the mechanics over a tried and tested formula. Each wave, typically lasting no longer than a minute or so, will often push your tank to its limits, throwing various enemy types into the mix. Some are static, firing powerful lasers at you; others will drop bombs, often cornering you until the blast radius diminishes.

Variety is definitely a key aspect in keeping Titan Attacks! interesting, then, and that’s further cemented with a challenging boss fight and a change of scenario after every twenty levels; with challenge stages offering bonuses every now and then, too.

If we’re being picky, it could be said that some backgrounds haven’t made the transition to the 3DS’s low-resolution screen too well, with the artwork often appearing blurry. However, taking more than a second to actually indulge in the background will only divert your attention from the action – and where it matters, the visuals are on-point.

Behind the scenes, there’s a surprisingly in-depth upgrade system that gives each level more of a purpose than simply pursuing high scores. Cash is earned each time you defeat a Titan, catch a falling enemy (which drop from the sky occasionally) or collect a pick-up from the UFO that speeds across the screen from time to time. The idea is to save up enough cash to purchase upgrades – such as bombs, increased firepower, and a boost to your weapons’ recharge times.

That not meta enough for you? Naturally, your tank can’t repair itself, and there’s no way you’re getting through the game without taking a good few hits. So, yep, you must also repair your tank’s shields with that hard-earned cash, making every hit count, and avoiding enemy fire truly meaningful.

There’s no extra lives here, with the game instead saving your progress automatically after each world. You can start from this checkpoint, upgrades intact, or start from the beginning with hopes of bettering your score early on, meaning earlier upgrades, and thus, leaving some extra spare cash for repairs later on.

Granted, the game will be over within four hours, but there’s not an ounce of filler to be found. Every minute spent with the game will be heated and tense, as you become one with your 3DS to make it just one wave further, or one rank higher on the leaderboards. And when you finally make it to the end, with sweaty palms and creaky D-pad to boot, you know you’ve earned it.

If it’s originality you’re looking for, Titan Attacks! probably isn’t for you. If you want a solid slice of arcade action on your Nintendo 3DS, however, you definitely won’t be disappointed.