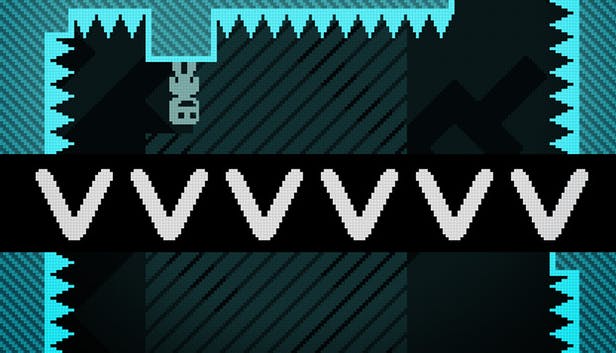 VVVVVV (or The Letter V Six Times) is one of if not the most basic modern games you’ll ever play. The visuals, the audio, the controls – everything about this game simply reeks of retro, and as a result is one of the most challenging, simplistic, and rewarding video game experiences of this generation.

Much like with a traditional retro platformer, you use the D-pad (or Circle Pad, if you so wish) to move Captain Viridian left and right, which is simple enough; yet rather than the ability to jump, much like your average video game protagonist possesses, Viridian has the power to flip gravity with a press of either one of the 3DS’s face buttons. While this sounds simple in principle, it leads to some frankly evil puzzles which would have you tearing your hair out in frustration.

We say ‘would’ because, thankfully, VVVVVV has what can only be described as an abundance of checkpoints, making the often-formidable jumps, flips and manoeuvres that are required much more bearable, and making dying much less frustrating – and trust us when we say that you will die in VVVVVV. A lot.

That’s not to say that the game’s overly difficult to finish, though, as beating the game to minimum requirements can be done in around three hours for first time players, and possibly in less than half of that for those who’ve played the game on its original platform.

Once you’ve rescued all of your crew members from alternate dimensions however, there are plenty of extra challenges and modes, some exclusive to the 3DS version, in the game. From collecting the twenty trinkets hidden throughout the game’s sizeable map to unlock songs from the fantastic retro-themed soundtrack (search for “PPPPPP” on YouTube), to the new Flip Mode which, as the name suggests, flips the game screen much like the Mirror Modes in the latest Mario Kart games, VVVVVV should keep dedicated players coming back for more. And while there’s a distinct lack of a level editor, the game does include an extra eighteen levels from other developers – Minecraft‘s Notch and VVVVVV‘s soundtrack composer have their own levels in there, to name a couple.

From the ‘Play Modes’ menu there’s even a ‘No Death’ mode that we’d call nigh on impossible, but at the very least it adds to the longevity of the game, providing you have a lot of patience!

Other than the slight concern about its length, the only other niggle we can find with the 3DS port is that it doesn’t take full advantage of the system’s capabilities: there’s no wide-screen, and thus has black borders; and the 3D is extremely subtle, if you’re being optimistic (virtually non-existent if not). That said, having the map constantly available on the bottom screen is a huge convenience in a game which focuses on exploration, and the 2D sprites look sharper than ever on the 3DS’s smaller screen.

While the price tag of £7.20 is a little steep considering the same game (albeit with a few less modes) is just £3.99 on the Steam platform, it’s still an incredibly fun platformer whose developer deserves your money.