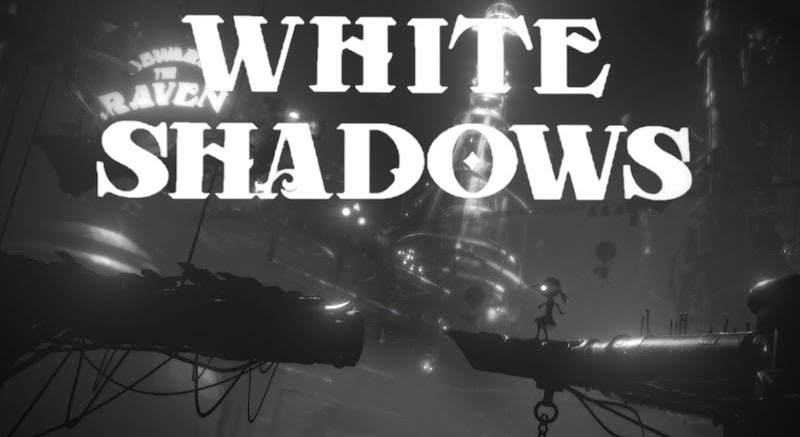 White Shadows is a 2.5D side-scrolling narrative adventure based in a city called Funworld, which despite its name seems to have been lost to darkness; a dystopian realm where monstrous machines rattle your DualSense controller’s vibration motor, and the only remaining light source in a world without sun is the ominous glow of neon advertising boards.

Similar to Death’s Door (which I reviewed a couple of weeks back), White Shadows gives us another avian protagonist in Ravengirl, however the similarities shared with Acid Nerve’s action-adventure title end there.

In fact, White Shadows is closer in tone, gameplay and aesthetic to Playdead’s Limbo, with more than a few similarities and shared tropes with 2010’s indie darling. Both games are presented through a monochrome lens for a start, and aside from jumping, crouching and interacting with their surroundings, neither protagonist has any extraordinary abilities.

Ravengirl’s jump feels particularly floaty which is just as well as platforming challenges come few and far between, leaving environmental puzzles – although still a rarity – to take precedence.

Some of these puzzles are occasionally a little obtuse with seemingly no useful tools at your disposal, while the way forward is blocked by an obscure barrier. In hindsight, the solution is relatively simple, but it’s worth noting that there were a couple of pain points where a guide would’ve been handy had I not been playing the game on launch day.

Despite these sticking points, White Shadows can definitively be categorised under the “thought-provoking narrative adventure” label – much like the games it draws inspiration from – and provoke thought it does, in an impressively cinematic manner.

In lieu of dialogue, in-world signage communicates White Shadows‘ narrative with slogans such as “all animals are equal – except birds!”, proudly plastered throughout the world of Funworld – thus touching on themes of inequality, slavery and sacrifice in an abstract manner.

Whether this was strictly necessary comes down to the opinion of the individual player, and while I did question the morality of my in-game actions on more than one occasion, these moments define a game that will surely stick with its players in the same way that Limbo continues to over a decade later.

Unfortunately, my experience with the PlayStation 5 version was hindered slightly by a handful of less-than-ideal performance issues, including frequent frame drops, background objects popping in seconds after their surroundings, and a complete freeze at around the halfway mark forcing me to restart my console. Thankfully, only seconds of progress were lost to this hiccup, and hopefully the developer can iron out these issues in the near future.

White Shadows tells a miserable story of oppression in a convincingly gloomy world via the means of a strikingly cinematic adventure. It’s not the most tonally appropriate game for the festive period, so it’d be my recommendation to hang tight for a hopeful performance update. If you’ve enjoyed any of its contemporaries – be that Limbo, Inside or Little Nightmares – Monokel’s debut has the potential to stand among the sub-genre’s best.