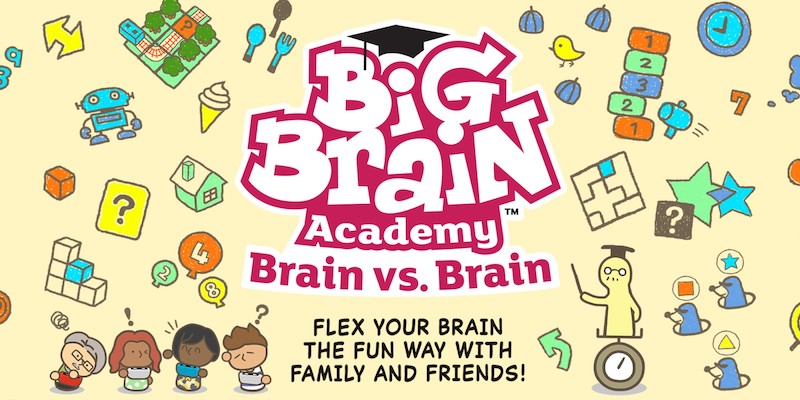 Big Brain Academy is one of those series which reared its head on Nintendo DS, at the pinnacle of Nintendo’s “Touch Generations” era, way back in 2005. Following a Wii sequel just two years later, the franchise has lay dormant until now, with Nintendo EAD / EPD instead focusing on Mario, Zelda, Animal Crossing, Pikmin and Splatoon.

In a year like 2021, though – a year which also saw a brand-new 2D Metroid game – it’s hard to be surprised by the return of Nintendo’s quirky alternative to Dr. Kawashima’s less expressive Nintendo DS brain teasers.

The game consists of twenty WarioWare-style micro-games, each one affording you one minute to solve as many puzzles as possible before time runs out. Naturally, some are better than others, and you should be able to master a majority to a gold standard within a a handful of attempts.

There are five categories of micro-game, with each one’s games designed to challenge a different area of your brain’s functionality. The games are all extremely basic – from simple maths equations and a version of the card game pairs, to winding a clock’s hands forwards by a set number of hours.

So there’s nothing particularly outstanding in any of the games, but it’s genuinely fascinating in that you can almost feel your brain adapting to Big Brain Academy’s way of thinking. A first crack at a certain puzzle may make you wonder how you ever made it through primary school, before the solution “clicks” after your second and third attempts, and within five minutes you’re going back for an extra star on your gold medal.

It’s all super fast paced, to the point that game never even tells you what the correct answer was when you’ve made a mistake. In fact, the combination of time constraints and the game’s scoring system makes Brain vs. Brain a real test of patience, too. When you run into a particularly tricky puzzle, it’s natural to want to take a wild guess in hopes of reaching that next rank, however in doing so you risk losing a chunk of your hard-earned “Brawn Points” which could relegate you back to the previous rank.

Nintendo has found a great balance with punishing your mistakes and encouraging you to solve each puzzle rather than take a wild guess. Each puzzle is also slightly harder than the last, with a slightly more complex mechanic or obscure solution to ensure you’re always using a little bit more brain power with each attempt.

Of course, all of this is relatively speaking, and the moments of stress and frustration are short-lived – games do only last for one minute, remember. Speaking as an adult, I managed to earn a gold star on each micro-game (and its more difficult “Super” equivalent) within a handful of hours. For younger, pre-teen players – whom this game is clearly aimed at – I can imagine the single-player offering will have much more longevity.

The great part of Big Brain Academy: Brain vs. Brain is that, despite its relative lack of content (which, to be fair, is reflected in its £24.99 price tag) it has the potential to stick with you thanks to an infinitely playable online mode – especially if you have a couple of friends who also own the game.

Being a Nintendo title, there’s no real-time interaction between players. Instead, you can download ghost data from both friends and random players around the globe, which works really well in the context of this game’s short sixty-second matches.

With hundreds of quirky items and catchphrases to unlock for your online player avatar, Big Brain Academy: Brain Vs. Brain comes highly recommended for younger Nintendo Switch players. For teenagers and above, your mileage may vary.