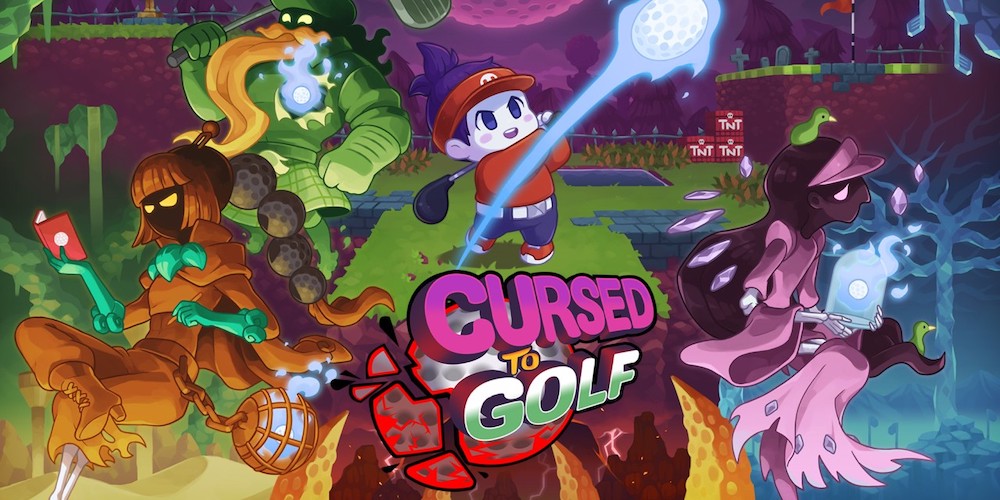 Each one of Chuhai Labs’ games to date has been unique. First, it published a Halloween-themed retro platformer, then it developed a realistic VR snowboarding game, followed by an unrealistic surfing game for the Playdate handheld. Now, we have Cursed to Golf.

It’s effectively a side-scrolling golf game where the goal is to, in Chuhai’s own terms, “survive” eighteen holes in a single “run”. This jargon will be familiar to players of the rogue-like genre, and that’s because Cursed to Golf has attempted to nestle itself among modern classics such as Hades, with the golfing subject matter offering another unique spin (if you’ll pardon the pun) on the genre.

Sadly, the game imposes the feeling of being cursed to golf on the player a little too well. Missing the seventeenth hole’s par score by a single shot will result in a Game Over and a trip back to the game’s hub world, which is occupied by a wonderfully-voiced character known as The Scotsman.

He, along with the player’s cursed golfer following his untimely demise, is trapped in a place known as Golf Purgatory – an underworld where golfers are sent post-mortem in order to prove their skills in a series of 18 holes in order to ascend back to mortality.

What Cursed to Golf loses in its conversion of a three-dimensional sport to a two-dimensional plane, it makes up for with otherworldly abilities, such as allowing the player to apply spin to the ball after it’s been stricken by a club. Being a rogue-like, the player must also build a deck of cards – packs of which can be bought from the enterprising Scotsman’s underworld retail chain, Eternitee – which offer a plethora of new abilities; some of which will take time and patience to master, while others very generously add a couple more shots to a stage’s par score.

Due to Cursed to Golf’s rogue-like nature, some repetition is to be expected. However, there are far more courses than the eighteen you’ll see in a single run, and these are randomised for each run so you should – in theory – never play the same sequence of holes.

I do have to ask, though, does every modern game need to lean on these mechanics? Would I prefer the game to have presented each of the developer’s promised seventy stages across a Mario-esque world map? It’s hard to say, as the cynic in me tells me that each of Cursed to Golf’s courses are not varied enough to sustain a game in that way, and this rogue-like design is a crutch to keep the player engaged by dangling the carrot that is ascension, and the end credits, at the end of the eighteenth hole.

Cynical point of view aside, the gameplay is solid and manages to remain engaging despite its limitations. There are four clubs to choose from, each with slightly different characteristics, and learning to approach each hole with the most efficient strategy is where most of the fun is derived.

The action of swinging the club and hitting the ball follows an extremely tried and tested formula, not dissimilar to the classic NES Open Tournament Golf’s. If you’re thinking two-dimensional Mario Golf, you’re not a million miles away. Basically, you swing and hit the ball by timing a press of the X button with the state of a power meter, and then pressing the same button again when the moving swing indicator is pointing where you want the ball to go.

Cursed to Golf is primitive at its core, but there’s something surprisingly addictive in attempting to build the perfect deck of cards, and then applying those abilities to set up the perfect run. Its rogue-like mechanics may be leant on a little too much, as the gameplay itself brings nothing new to the table, but there’s no denying that the sum of those two parts results in a unique experience never before found within either of the rogue-like or sports genres.