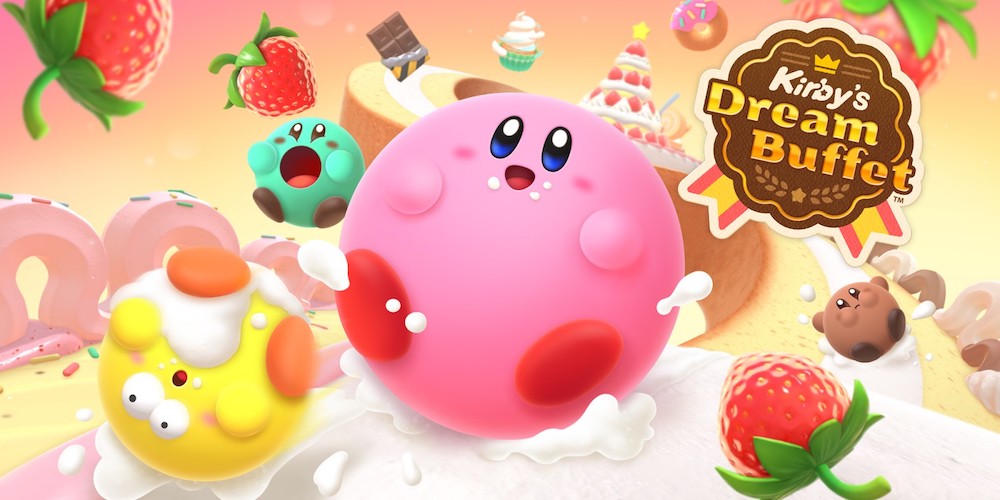 It’s crazy to think the Kirby franchise is now 30 years old. In terms of classic Nintendo franchises, I’d like to think of Kirby as one of the more innovative. Even with the overused “heh, you suck” joke, the games can be particularly experimental and creative when they need to be.

Kirby fans (and Kirby himself) have been eating well these past few years, with the pink puffball getting two brand-new mainline titles on the Switch and 3DS each. Personally, I appreciate the smaller spinoff Kirby games as much as the mainline entries, and Kirby’s Dream Buffet does not disappoint. It’s a bite-sized racing game with a lot of heart that fans will devour.

I’ve heard the obvious Fall Guys comparisons, but Kirby’s Dream Buffet feels more akin to a different experience: Iggy’s Reckin’ Balls. Or to be less obscure, a Marble Race-esque title mixed with the Mario Party minigame Platform Peril. The main mode is a grand prix buffet, where four Kirby characters are racing to get the most strawberries.

Kirby’s Dream Buffet’s main mode is separated into four different segments: two racing stages, a minigame, and a battle royale finale. Kirby is controlled simply by moving the analog stick, ala Super Monkey Ball or Marble Race. You can also jump and activate copy powers by picking them up on the track. While getting to the finish line first means you can devour the biggest of three strawberry-laden cakes, you’ll also want to stick around and grab the different fruits scattered across each track.

Between the two race stages is a mini-game; from defeating enemies holding strawberries to breaking crates, it’s a good way to catch up if you did poorly in the first race. After a second race stage, you’ll have a main course Battle Royale: here, all four Kirby characters will fight to knock strawberries out of each other while grabbing more for themselves. It’s Super Monkey Ball’s Monkey Fight but with cooler powers and a lot more at stake.

At the end of the buffet, you’re eligible for three bonus strawberry mounds (think of them like Mario Party’s outlandishly random bonus stars). From using the most copy powers to hovering outside the stage the longest, these awards will keep you on your toes and be a deciding factor in the closer matches.

Finally, the strawberries you collect will go into a gourmet rank (Kirby’s Dream Buffet’s own battle pass), which will slowly unlock more content. From costumes, music tracks, and even new courses to play, there’s a lot to keep you coming back for seconds.

Kirby’s Dream Buffet feels like an expanded subgame from a mainline Kirby game, for better or worse. The £13.49 / $14.99 price tag is perfect for this experience, as it has enough content to keep you hooked but also has rounds short enough to satisfy a pick-up-and-play session. That said, I feel like this could have been free-to-play if Nintendo wanted to engage more players and monetise the adorable costumes.

As a celebration of Kirby’s 30th anniversary, Kirby’s Dream Buffet has a generous amount of references from the whole series. You can unlock skins that dress you up like Marx or Meta Knight, and there are even save bonuses if you have previous save files from the other Kirby games. You can also decorate a lobby cake with bakery ornaments adorned with characters from previous titles.

As a standalone download title, Kirby’s Dream Buffet works surprisingly well, with one major flaw. It’s a party game that doesn’t have full couch multiplayer! While you have online matchmaking for four players, you can only have up to two Kirbys on one console (four player local requires each person to have a Switch and the game). The performance admittedly suffers when playing splitscreen, but I feel like it would have been cool to have a four-player option.

It’s a shame, because its four-player mode is where the game shines the most. Playing online was a blast, and I could definitely see this being played at some of the gaming parties I go to.

Additionally, Kirby’s Dream Buffet feels geared towards a random experience with stage selection. You can’t customize which races or minigames you want to play, and there are no options to tinker with in terms of gameplay, even for custom matches. If you like a stage, you’ll just have to hope you get it in another run.

Thankfully, there’s a free rolling mode where you can test out how to roll a Kirby through the different stages, though I would have rather had a stage selection or practice mode instead. A lot of the game’s mechanics scream, “this can be free-to-play!”, but a retail price tag means you don’t have to be nickel-and-dimed to get another cute Kirby costume. Let’s just hope for free updates in the future.

That said, Kirby’s Dream Buffet is one of the sweetest Switch titles in terms of aesthetic. Everything is wrapped nicely in a larger-than-life sweet atmosphere, and the game just pops out with the Switch OLED in handheld mode. The music, which also borrows from previous games, is amazing as always, and the way Kirby interacts with others will melt anyone’s heart.

Kirby’s Dream Buffet is a must-have for Kirby fans, but is a harder sell for anyone expecting something meatier. As it stands, the game is a fun little treat for those who want to play a Kirby racing/party game, but make sure you can find some friends online with a copy of the game if you want to experience its chaotically cute nature to the fullest.