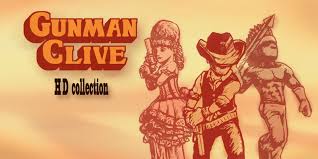 Gunman Clive HD Collection features two modern 3DS platformers, bundled together and sold in a complete package on Wii U. There’s little in the way of new content for returning players, and the heavily stylised visuals don’t gain a great deal in the transition from 3D to HD.

That’s not to say this collection isn’t worth your time. The price point on Wii U presents a saving versus buying the two titles separately on Nintendo 3DS, and returning players would have trouble finding complaints with the £3.59 price tag.

Gunman Clive, to begin with, is just as charming as it was on the small screen. The minimalistic level design, sepia visuals and jaunty soundtrack all contribute to its unique Wild West flavour, and with stages that never take longer than just a few minutes to complete, it’s never given the chance to grow old.

Although Clive behaves like a modern platform hero, the game’s retro inspiration shines through, thanks to the level design and a unique blend of classic and contemporary gameplay. Precision platforming is a little more forgiving than you’d expect from a retro platformer, and therefore more satisfying as a result — instead challenging players through its clever enemy placement and lack of checkpoints.

You can take up to four bullets from enemy cowboys on the standard difficulty setting before your health bar depletes and you’re required to start the level again. Of course, this is countered by power-ups that drop when you defeat certain enemies. Cake replenishes your health, while gun upgrades offer missiles, bullets that lock-on to nearby foes, and other such bonuses. This adds another level of strategy, as one hit from an enemy reverts you back to using the single-shot pistol.

Despite being a basic platformer at its core, you may be surprised at how many different concepts are introduced to the gameplay. One minute you’ll be running across the ceiling, the next you’ll be riding a mine cart through underground caverns. And just as quickly as these mechanics are introduced, they’re taken away and forgotten about.

If I had to highlight one fault with the game, it’s that nothing lasts quite long enough. As I defeated the final boss after a short 45-minute playthrough, I was left yearning for more content. Perhaps some re-imagined stages with additional challenges, a boss rush mode, or maybe an endless mine cart level? It was sadly not meant to be, however, and the only new addition to this Wii U port is Chieftain Bob — from the Gunman Clive 2 — as a playable character. There is a little replay value offered in Hard mode — which more than halves your max health — but it takes away from the overall balance of the game (or maybe I’m just bad?). Replay the game with one of three bonus characters, however, and you’ll find yourself entirely re-thinking how you approach each level. For example, Chieftain Bob’s spear particularly shakes up the gameplay, as it requires you to get up close and personal with enemies who retain their guns and throw grenades at you from afar.

Gunman Clive 2 throws in a lot more of, well, everything, but the original’s unique charm is lost somewhat in the sequel. The striking browns of the first game are replaced with over-saturated colors that seem to reflect the game as a whole to some extent. As the snow, jungle and castle stages are filled with icy blues, deep greens and regal reds respectively, the sporadic — and somewhat messy — use of color somewhat mimics the variety in environments, which serves to remind us of how many mechanics are introduced and often forgotten — seemingly before they’ve had their true chance to shine.

Taken at face value, there’s still a lot of good to be found in Gunman Clive 2. The opening levels are almost certainly a highlight, as you crash land back on earth following the events of the first game. You’ll run through a burning town with collapsing buildings and an almighty score, giving the game something of a cinematic feel — no small feat in a side-scrolling platformer.

But then it deteriorates. Japanese-themed levels include sumos almost-unavoidably dropping onto your head from the sky, and Samurai using throwing stars before you have the chance to even think of retaliating or evading. And then there’s one particularly infuriating level, which requires you to ride pandaback (not horseback — we’ve left the Wild West behind, remember?) while you’re being chased by a giant buzz-saw. Sounds fun in concept, sure, but in reality, the panda occupies the right-hand side of the screen; you have very little time to react to enemies or time your jumps with any skill.

When you’re not being cheated into death, Gunman Clive 2 is still a solid platformer, and one that’s worth playing if only for the more unique levels. Without delving into too much detail, ninety minutes with this sequel will feel well-spent, and any niggles will be forgotten as you ward off the final boss.

Despite the fact that Gunman Clive HD Collection is two games in one, there’s still not a great deal of content, but that’s reflected in its price. If you somehow missed Gunman Clive, that game alone is worth the asking price here. The sequel may be a forgettable romp through time, but fans of the first game will feel right at home and will surely derive at least some enjoyment. Double-dippers needn’t apply.