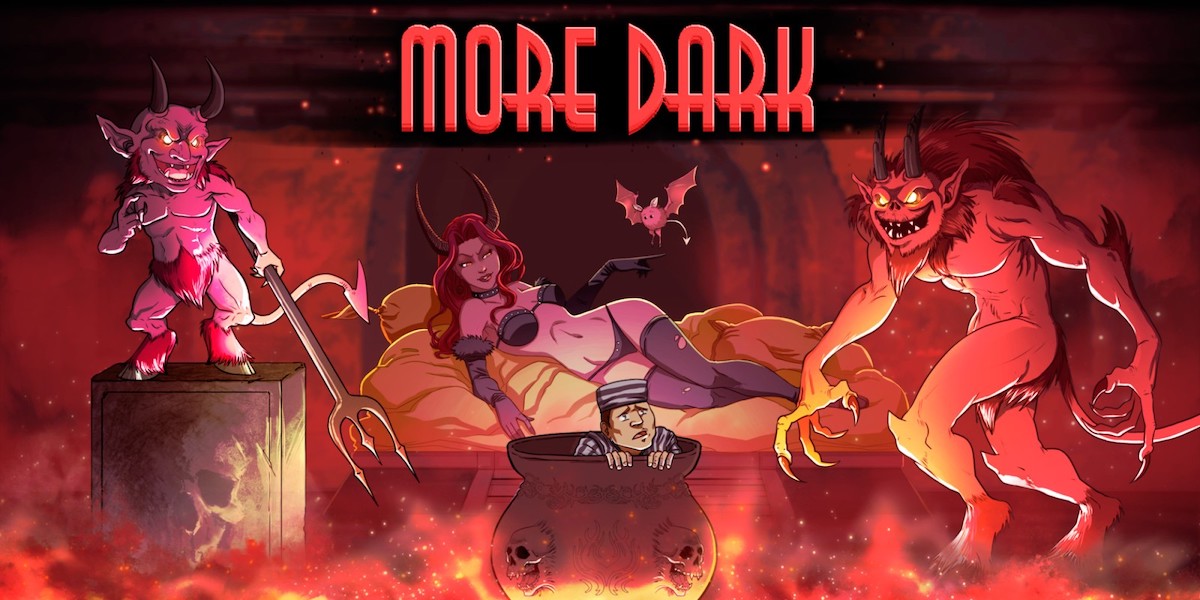 More Dark is a forgettable £4.99 romp through a hellish environment, but it feels more like a level pack for a 1980’s arcade game than anything unique.

It’s a side-scrolling collection of sixty single-screen stages, each one manifesting a bite-sized blend of puzzle- and action-based gameplay. It’s your task to clean up Hell after a short vacation has left the place in disarray. In reality, this translates into a simple gameplay loop of defeating the enemies on-screen which in turn opens up the exit door.

Your character is a 16-bit interpretation of the Devil, although his abilities don’t quite reflect the personification of evil. He can nip left and right, and jump the height of a single tile. All wrongdoing is undertaken in the classic act of hopping on an enemy’s head, while three additional abilities are drip-fed to you throughout the course of the game, adding a little variety to proceedings.

The core mechanics ultimately boil down to pushing and blowing up crates with your unlimited supply of bombs to clear a route through each stage. It’s not quite as simple as it sounds, as you need to be mindful of your exit strategy. Oftentimes you’ll blast your way through the enemies, before realising that you also destroyed a crate which is required as a platform to the exit. Thankfully, you can restart the level at the push of a button, yet the limited scope of each level rarely forces you to do so more than a handful of times.

In truth, More Dark doesn’t do a great job at engaging the player. I completed most levels within a couple of minutes, with only one particular stage towards the endgame managing to halt my progress and forcing me to think about how I was utilising my power-ups. The final boss fight spruces things up with a gun-wielding foe, and occasional retro-inspired mini-games shake things up for a couple of minutes, but for the most part it’s a mindless romp with little replay value.

You might consider picking this one up on another platform for a cheap platinum trophy or 1000G, but the Nintendo Switch version doesn’t even have that going for it. If you’re looking for a solid, retro-inspired platformer on Nintendo Switch then check out VVVVVV, SuperEpic or even Electronic Super Joy.