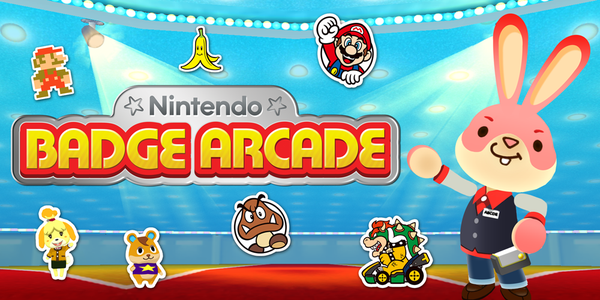 If you’ve experienced Rusty’s Real Deal Baseball in any capacity, you’ll be familiar with its payment model, whereby you haggle with a retired baseball-playing dog to reduce the real-life prices of its mini-games. This is a prime example of Nintendo’s unique approach to “free-to-play” gaming, which was also reflected in the late Iwata’s reluctance to even use the term – instead favouring “free-to-start,” which inherently implies that money can be spent within a particular app or game.

Nintendo Badge Arcade is the latest foray into this particular brand of gaming, and in fitting with the legacy left by Satoru Iwata, it’s extremely tasteful in its execution. You’ll be introduced to the whole concept of spending real money by a humble pink rabbit, who highlights that “the badges don’t make themselves!” and that the money you spend in the arcade is invested into the development of new badges in the future.

To give you a taste of the gameplay, you’ll be offered five free plays in which you get to keep all the badges you earn. As you’ll understand if you’ve ever visited a real life arcade, you hold the A button to move the crane arm across the screen. Once you release it, the arm will stop, descend and grab any badges within its reach. Once the badge – or badges – get dropped down the gap at the bottom-right of the screen, they’re yours to keep and can then be used on your Nintendo 3DS HOME Menu.

Personally, I missed the Mushroom badge from the Super Mario Bros. series, and I was more than a little tempted to spend the £0.90 pence (or $1 in the United States) for another five goes. I eventually dissuaded myself and followed the rabbit’s instructions to decorate my Xenoblade Chronicles 3D theme with Mario pixel art. Nintendo Badge Arcade also includes exclusive HOME Menu themes, which work hand-in-hand with certain series of badges.

Various examples are shown and reveal some particularly cool layouts that become possible when you spend time (and money) within the app. The Mario Kart series features our beloved Nintendo characters depicted in their karts, and these badges can be arranged on the HOME menu and used in conjunction with a Badge Arcade-exclusive theme to replicate a two-dimensional race track. Other series include Pikmin, Splatoon and even a selection of retro Nintendo consoles, with Pokémon and more on the way in forthcoming updates.

With plenty of content to choose from, and a potentially limited budget for younger players, Nintendo has rather generously included a “Practice Catcher” which allows you to try your hand at any one of the current day’s featured stages. Despite not actually winning real badges here, it gives you a good idea of what to expect should you decide to splash the cash – plus, you have the chance to win a free go at one of the paid stages! For the patient types, it’s definitely possible to earn a healthy badge collection without spending a dime.

All-in-all, Nintendo Badge Arcade gamifies the process of unlocking more customization options for your HOME Menu in an interesting way when it could’ve easily gone down the route of being a simple “Badge Shop.” It never pressures you into spending any money, yet addresses the subject in a light-hearted and responsible manner. If you’re already fan of customizing your Nintendo 3DS with face plates and themes, you’ll love this.