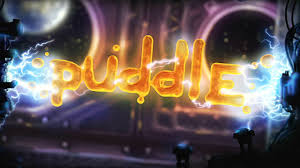 We can’t help but feel a little sorry for Puddle. After all, it is without a shadow of doubt the least well-known game to arrive in the eShop on launch day – so much so that we didn’t even know about it until the day before its release. And that’s a shame, because Puddle doesn’t do a lot wrong. What it does get right, though, is often marred by its own unambitious levels and a few questionable design choices along the way.

In the fantasy world of Puddle, it’s the player’s goal to tilt a puddle of liquid through increasingly difficult (and sometimes frustrating) levels, filled with obstacles and puzzles. These range from hitting a switch to open a path into the next area, to timing your tilts to jump over small flame-filled crevasses; which sadly rely too much on luck rather than skill.

There’s three control options for you to choose from: the default motion controls, the ZL and ZR buttons, and the left analogue stick. As the game was originally designed for Xbox 360 and PlayStation 3 – and subsequently these platforms’ analogue triggers – the Wii U game doesn’t handle anywhere near as well as it could, and very much should. With the extra potential that the GamePad offers, it’s sad to see the developers release a straight port of the game on Wii U – accurate tilt controls wouldn’t have gone amiss, rather than simply mapping the superior button controls to the GamePad’s motion sensors; although we’re sceptical that even this could save Puddle from its clunky physics engine.

It’s quite the drawback, that. In a game which is based around a single gimmick that requires precision controls and a relatively complex physics engine, for both of these aspects to turn out sub-par, it’s really not acceptable. If you can look past these flaws, though, there’s still some fun to be had with Puddle.

Each of the game’s eight worlds feature a different theme, and more often than not, multiple different liquids for you to transport through the stages. From water, which evaporates if you pass over flames for too long, to blood which you pump through a human’s veins; from molten lava which solidifies should you let it cool, to nitroglycerin which explodes if you’re not gentle with it. Each world also has its own distinct graphical style, and whilst each consistently conjures a lush environment for your eyes to take in, the game often feels disjointed as a result – despite short cut-scenes showing the transformation of your puddle between worlds.

In terms of the actual level design, the game offers something of a mixed bag. As we mentioned earlier, a majority of levels are fun to play through, if a little uninspired. And then there’s a handful of ‘bonus stages’, which pop up every now and then; avoiding spoilers, though, they range from being better than the standard levels, to downright frustrating, and again luck-based. With the decidedly small number of these stages, though, they’re all equally unmemorable.

At the end of the day there is fun to be had with Puddle, although if you’re looking for a game to quench your thirst for a water-based adventure (pun intended!), we’d have to suggest that you wait for Hydroventure: Spin Cycle on 3DS later this month.