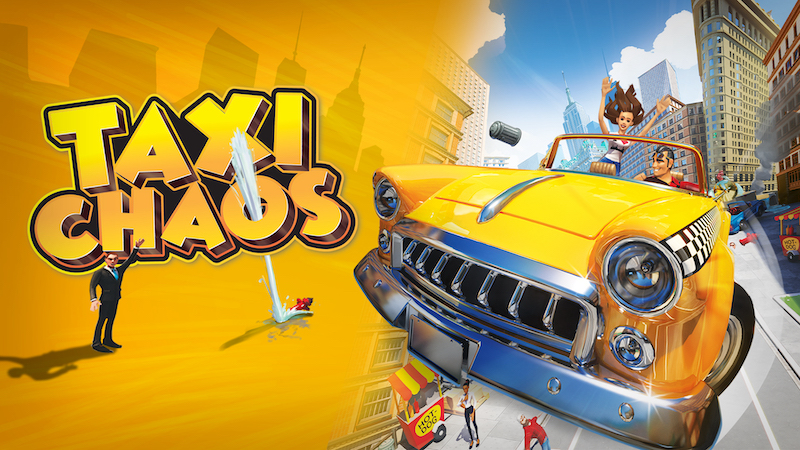 I was never crazy about Crazy Taxi back in the day. I did spend a bit of time with the PS2 version, particularly in the Crazy Box mini-games, but it was The Simpsons Road Rage which really captured my interest. Its massive roster of beloved characters and their unique vehicles really set it apart for me, but it’s impossible to deny that Crazy Taxi certainly found its audience with SEGA fans.

Taxi Chaos is for those fans and is unashamed in saying so. Let’s see if the formula holds up in 2021, shall we?

The core premise has remained unchanged since the genre’s inception in 1999. Arcade Mode gives you just ninety seconds to pick up passengers and drop them off at their respective destinations. The more passengers you deliver, the higher your ranking, and the quicker you deliver each passenger, the bigger the tip they’ll leave for you; meanwhile crashing into other vehicles docks money from your paycheque for damages.

That ninety second time limit doesn’t sound like much at all, and it doesn’t feel like much in reality, either. Luckily, passengers are in as much of a rush as you are so they’ll hop right into your roofless taxi no questions asked, and no doors required. Sadly, that’s as far as Taxi Chaos goes in retaining any parity with Crazy Taxi.

The mechanics are simply not as nuanced as Crazy Taxi’s which is … *ahem* … crazy considering there’s a twenty-year gap between releases. Crazy Taxi was almost Mario Kart-esque in terms of its controls, which were extremely simple to use as a beginner, but there’s a level of depth hidden beneath the surface which warrants a 3,000 word webpage detailing its intricacies and how to get the most out of its systems.

Here in Taxi Chaos it’s a little less in-depth. You simply hold both the brake and the accelerator to spin up your wheels, allowing you to rotate the car into your direction of choice, and then release the brake to launch into a boost. One drawback here – aside from Vinny and Cleo’s servicing bill, of course – is that your brakes have no impact for a few seconds after launching, meaning that once you’ve initiated the boost you’re forced to commit to it. There’s no way to slow down or swerve should another road user, or a brick wall, throw itself in front of your cab.

It almost doesn’t feel fair to compare every aspect of Taxi Chaos with Crazy Taxi, but almost everything has been lifted directly from the ’99 Arcade classic. I downloaded the iOS port for the sake of comparison, and the difference was night and day – and that’s factoring in the icky touch-screen controls. Team6’s interpretation of NYC (that’s New Yellow City) is flat and pales in comparison to Crazy Taxi’s heavily exaggerated San Francisco-inspired city. Every street ends in a 90-degree crossroad, and the destinations are usually just simple buildings at the roadside.

If the city has no character, then neither do the characters themselves. Within a few runs of the Arcade Mode you’ll have heard repeated lines of dialogue between your chosen taxi driver and each fare, and it’s usually a depressing commentary on the state of corporate NYC, or some wannabe hipster who uses more hashtags than adjectives in their sentences.

Having said all of the above, there are some gameplay and even story additions in an attempt to modernise the genre. Some passengers in the world have a background and story arc – one example being an extremely unlucky guy who needs some four-leaf clovers to turn his fortunes around. This becomes a quest of sorts, and does add a layer of depth to the gameplay, but you’ll struggle to find much within that strict ninety-second time limit in Arcade Mode.

Thankfully, Free Mode is more relaxed and offers the chance to explore, find the passengers with stories to tell, and collect their desired items scattered throughout NYC. As mentioned before though, the world is flat and generally uninteresting, so you’ll struggle to stay invested for long. The aforementioned cloves just pop up on the pavement (or sidewalk, for my American friends) and there’s sadly no nooks and crannies to discover within the city.

On the other hand, Pro Mode is unlocked after you’ve achieved a four-star rating or higher in Arcade Mode, and this takes away your staple navigation arrow leaving you to navigate the city and deliver passengers using only your pre-existing knowledge of the city and its locales. It should’ve been called Blind Mode really, as the game’s unremarkable world design becomes even more noticeable as you’ll struggle to tell the difference between the art gallery and the airport.

And to top it off, the game’s presentation is lacklustre as well – at least on Nintendo Switch. The unique taxis’ models are designed and modelled well, but the graphics and art style are another unfortunate let down, with poor quality audio from the passengers’ voice actors (although this is perhaps a consequence of remote working?) and the less said about the soundtrack the better. If you must download and play this game, I insist that you do so while streaming The Offspring’s music on Spotify.

Fair play to Team6 and Lion Castle for bringing back a now-dormant sub-genre, but unfortunately Taxi Chaos falls flatter than a punctured tyre. Every imitation of its inspiration falls short of the mark, and the new additions do little to modernise a twenty-year-old formula. In a world where Crazy Taxi is still adored – and readily available on various modern platforms including Xbox Live Arcade, Steam and iOS – I’d have to recommend sticking to the game that started it all.